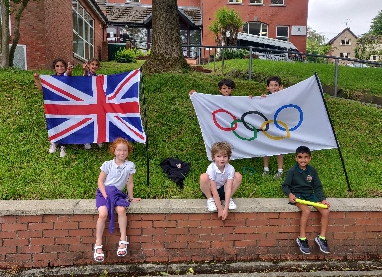 Home Learning has continued as normal and we have been excited this week by the whole school focus of the Olympic Theme.

Many of the Olympic activities  have already been shared on our social media platforms – but examples of activities  which children have been involved in include:- Nursery and Pre School hoop races; kangaroo jumps and springing;  creating an advert and promotional advert and jungle for the Olympics; recreating the Olympic rings;  Olympic quizzes; being allocated a country to represent; assemblies; videos of classes passing on their home-made torches to each other; making Olympian banners; looking at Olympic data in Maths; a quiz to make as many words as possible from ‘Tokyo Olympic Games; carrying out Olympic research; designing an Olympic medal or logo; researching inspirational Olympian or Paralympian athletes and writing poetry about the Olympics. Phew, what an exciting week!

Ismael produced a fantastic film of his Olympic Cooking Challenge which you can view below.

Here is a gallery of some of the things that have happened.