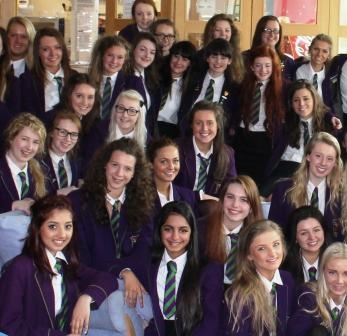 Tissues were an absolute must have in this morning’s Sixth Form Stand Down assembly as tears flowed down cheeks when Head Girl, Charlotte Stockwell, ably assisted by Deputy Head Girl, Sophie Ward looked back at the class of 2013’s Westholme life.   Hilarious videos, accompanied by moving poetry and, of course, ukulele playing, made this Stand Down assembly one to remember.

Head of Sixth Form, Mrs Waldron, wished all the Upper Sixth well in their examinations and their future lives.   She said that it had been an emotional week, with much fun, dressing up,  reminiscing and  video recording!   Mrs Waldron said that it is not just academic knowledge and qualifications they will have gained from Westholme, but lifelong friendships.   She encouraged everyone to seize every opportunity, to be happy, healthy and successful in whatever they chose to do, and to keep in touch with Westholme.