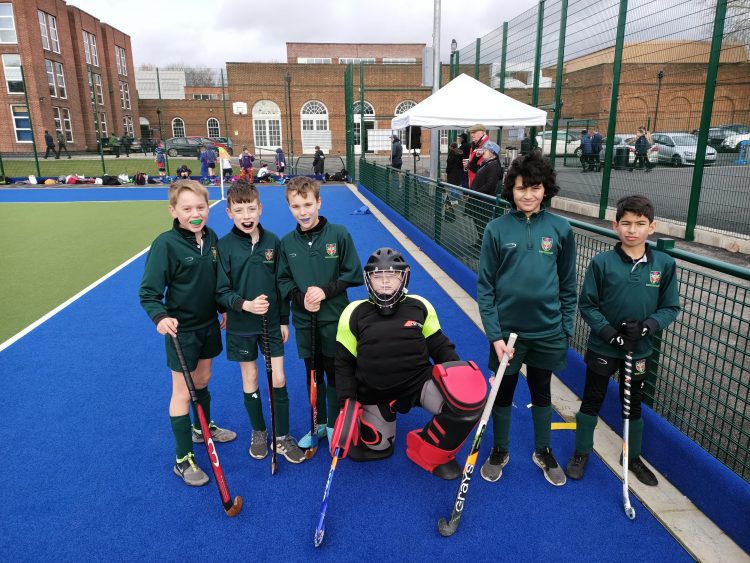 On Monday we had an historic first for Westholme. Our first ever Boys Hockey team, of any age, took to the field. We travelled to Manchester Grammar School to participate in the AJIS Boys Hockey tournament. There were 12 schools taking part altogether.

Obviously, this being our first match, we were lacking match experience. This meant that we started off relatively naive in terms of positioning defensively and direction of play. Fortunately, we learned quickly as we were taught hard lessons by a few of our opponents. We lost our first game narrowly 1-0 then we received an absolute hammering from the eventual Cup winners, Kings Mac. The other group games were hard fought but ultimately we finished second best. This put us into the plate competition, which was against teams much more on our level.

We made it through to the Plate semi-finals, where we enjoyed a thoroughly entertaining match against Bolton School. It was end to end play but neither side could achieve the breakthrough to win. All square at full time. A 5 minute period of Golden Goal followed. Thankfully, Ismael scored a couple of minutes in to send us through to the final!

The final was against Scarisbrick. The two teams were extremely evenly matched. Scarisbrick scored first, slightly against the run of play. We were up against it! I have often found that in finals of school competitions, it is the side that wants it more that finishes victorious. Were we hungrier? Yes! We pressed forward and unleashed sustained attack after attack, throwing everything Westholme possessed at them. Hurrah, a goal was our reward and the game finished 1-1 at full time. Another Golden Goal period was to follow. 5 minutes for glory or nothing. What was it to be? The lads tore into them and we hurled ourselves at them, putting bodies on the line to try and wrest victory. 5 minutes passed and neither side had scored another goal. What next? The coaches agreed to share the trophy rather than put the lads through penalty flicks, which neither side had practiced! There was only one set of medals on the day, one side would take them home and one side would be posted them later in the week. How to decide it? A coaches Rock Paper Scissors obviously! Sadly, Mr Barnett went for a rock and the Scarisbrick coach went paper, so we would have to wait for the medals.

A thoroughly enjoyable day which finished more successful than we could have imagined.

Well done to the entire team, Westholme is proud of you.