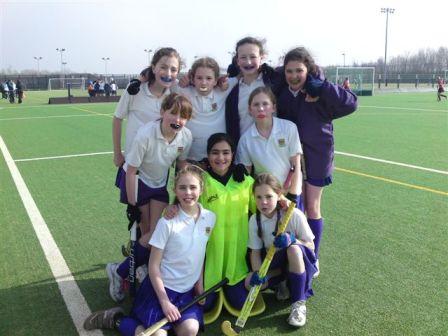 The Year 6 hockey team set off to play in the AJIS hockey tournament in Preston.  They won the first game against Alderley Edge 2-0.  What a great start.  The second match to be played was against King Edward & Queen Marys, which they also won with a very close score of 1-0.  Another two wins followed, as they beat Birkenhead Prep 4-0 and Stockport Grammar 1-0.

With a total of 20 points this ensured they got into the final round, which was a first for Westholme.  Unfortunately they didn’t win their next game against Kirkham, but did go on to beat Rossall.

Their final match against Kings, Chester was sadly a second defeat – they lost 2-0.  However, out of the 25 teams that competed, they finished 3rd overall.  This was a fantastic result and all congratulations to the girls who took part and of course to Mrs Griffiths for coaching us so well.