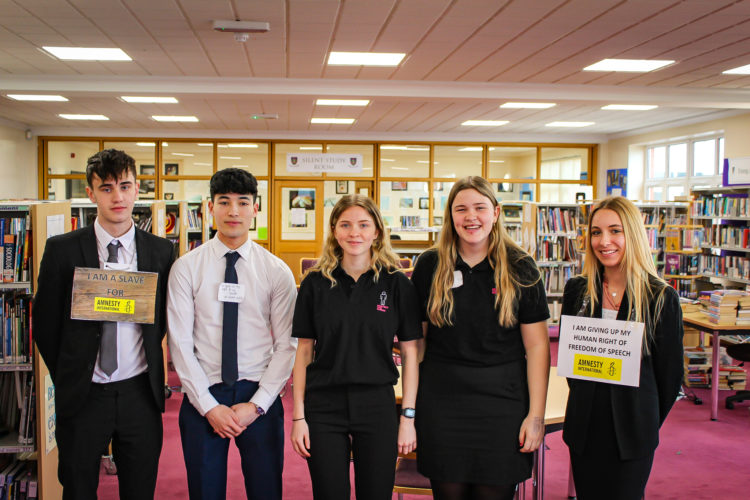 Earlier on this term, the Amnesty Human Rights Group made up of members of our INSPIRED Sixth Form gave up one of their human rights for the day, to raise money for people currently suffering in Afghanistan.

They asked their fellow students to watch the following video clip to help them understand the way that people’s lives have been affected since the Taliban have taken power in the summer. (Watch clip Day in the life of a child in Afghanistan | Newsround – YouTube) The video shows children and their families suffering, and the Amnesty Human Rights Group were conveying the message to their fellow Westholmians that they can do something to help.

The student group undertook a sponsored silence, fasting, giving up their mobile phones and even becoming a slave for the day. By giving up one of their rights, they wanted to highlight that human rights abuse creates injustice because it robs an individual of their dignity and freedom. The people in Afghanistan currently don’t have access to their most basic needs of food, education or healthcare. Many children are orphaned and are living in a state of despair.

Students were asked to look out for the Group’s Leaders around school and support their work by donating generously to the cause. There were also posters dotted around the school with further details on how students could get involved and help.

We look forward to collecting the kind donations and well done to all of the students who were involved in running the group. A big thank you to all those who donated to such a worthy cause!