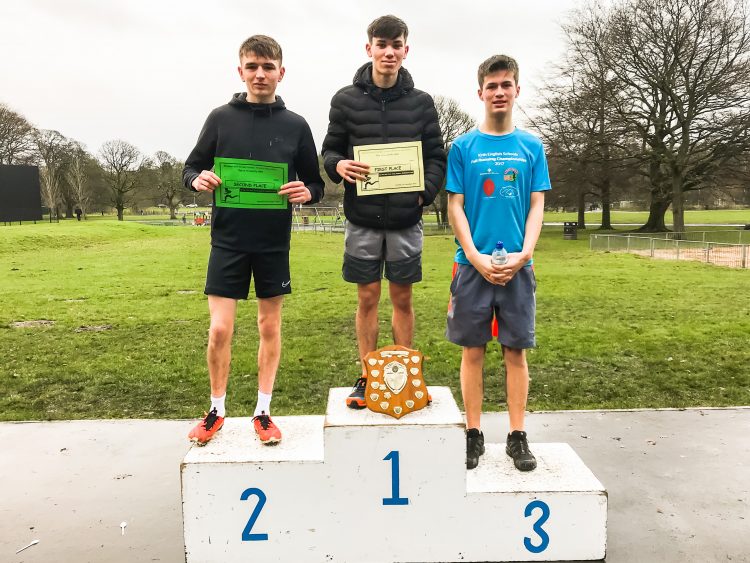 It was fantastic morning at Witton Park in the Blackburn with Darwin Cross-Country Championships. There was a host of successes throughout the age groups and all runners should be proud with their efforts.

In the U12 boys race Ben Jackson and Cale Heaton finished in the top 10 and in the girls Holly Beswick finished on the podium in third place.

Both the U14 boys and U14 girls were crowned champions of Blackburn with magnificent performances. In the boys race there were three top 10 finishes with Jonny Brindle finishing 3rd overall. Lloyd Ince followed him in 7th and Lewis Warner-Jones in 10th. The result was even more remarkable considering both Jonny and Lloyd raced against runners from the year above. The U14 girls dominated their race with Lara Ingram-Weston finishing in 1stplace, Eva Knowles in 3rd, Amelia Halstead in 4th, Eadie Beswick in 5th and Grace Berry in 6th. This was a record points score in the Championships! The Girls also won the U16 race with Charlotte Corrigan winning the race followed by Lucy Eastwood in 4th, Hollie Cubbon in 5th, Hannah Berry in 8th and Millie Kiss in 9th. To finish the morning off the U18 boys won the overall trophy with Will Backhouse winning the race, Thomas Duckworth finishing in 2nd and Theo Cains in 4th.