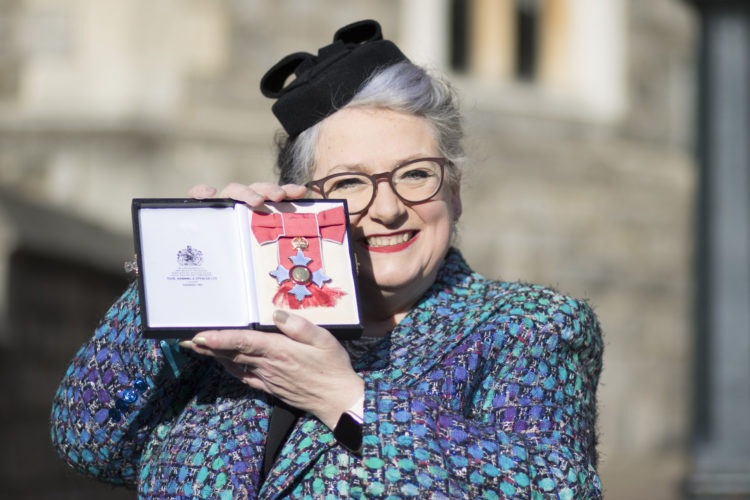 We were delighted to hear the news that Professor Sophie Scott, an Old Westholmian and current neuroscientist at University College London (UCL),  received a CBE from Prince Charles this week.

Professor Scott, who is Director of the Institute for Cognitive Neuroscience, researches the brain basis of human communication. She said her love of science began right here at Westholme School.

When asked about where her passion for science came from, Sophie said: “My headteacher [at Westholme] was Dr Bond, and she used to teach chemistry. Before entering teaching she worked as a research chemist and I loved hearing her stories. It was my favourite lesson. She was an inspirational role model.” The CBE – announced in the Queen’s New Year’s Honours list in 2020 – was awarded for services to neuroscience.

Speaking about the investiture at Windsor Castle this week, Professor Scott said: “It was a really lovely day. Prince Charles presented the medals and a had a little chat about neuroscience. It was a pleasure to be in a room with so many interesting people who have achieved great things in their field of work.”

During her time at Westholme Sophie, originally from Mellor, was on the public speaking team, school challenge team and appeared in school productions.

While at school, her team got through to the regional finals of a public speaking competition, and she fondly remembers playing Colonel Pickering in My Fair Lady alongside now renowned actress Carol Starks.

History has repeated itself – after the former challenge team student went on to appear in the TV version of University Challenge in 2018, representing Westminster University – her former University.

Professor Scott was also presented with the Michael Faraday Prize and Lecture last year for her work in engaging the public with neuroscience through events, talks, TV and radio, exemplifying how science communication can enhance scientific excellence.

She said: “The opportunities I had at school gave me confidence to stand up and deliver presentations.“

Sophie has also appeared at the Hammersmith Apollo as a stand-up comedian for her science-based comedy, and has been asked to officially open the new Westholme Preparatory School in September.

“I have been very lucky to have the benefit of the education I have had and it’s an honour to be asked.

“I remember when Margaret Thatcher opened a Thatcher wing at Westholme School in 1970 so it’s a tremendous honour to be asked to open the new school ahead of their centenary in 2023.”