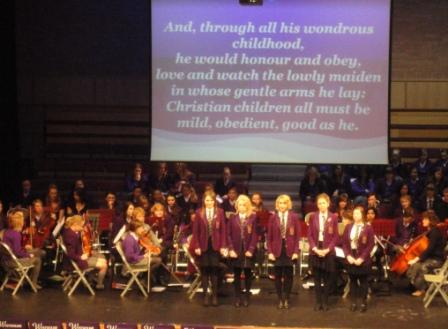 The Charity Christmas Concert in aid of the British Heart Foundation

In aid of the very worthwhile charity, the BHF, the Westholme family came together in a lovely celebratory evening of carols and songs.  Our tiniest 5, 6 and 7 year olds emerged beaming, and set the tone of the evening beautifully with their energetic and delightful singing.  The Swing Band rocked and the Orchestra complimented every hymn to perfection.  Our Juniors glowed (both metaphorically and in reality with their candles) and the audience responded warmly.  Our Senior and Junior choirs from Wilmar Lodge put on some very accomplished performances too, despite the fact that several girls had been slotted into unpractised roles at the last moment!  The night was made even more special by the presence of several of our former pupils, who joined in with typical Westholme joie de vivre, although likewise, many had never seen the music before!

Mrs Croston said, “It was a very special end to the term, and it was super to see so many people there despite the frosty weather. The tickets sold out so I anticipate we will have a healthy sum to give to the British Heart Foundation, which is an exceptionally worthwhile cause.  Thank you to everyone who supported us.  We hope you enjoyed it as much as we did!”