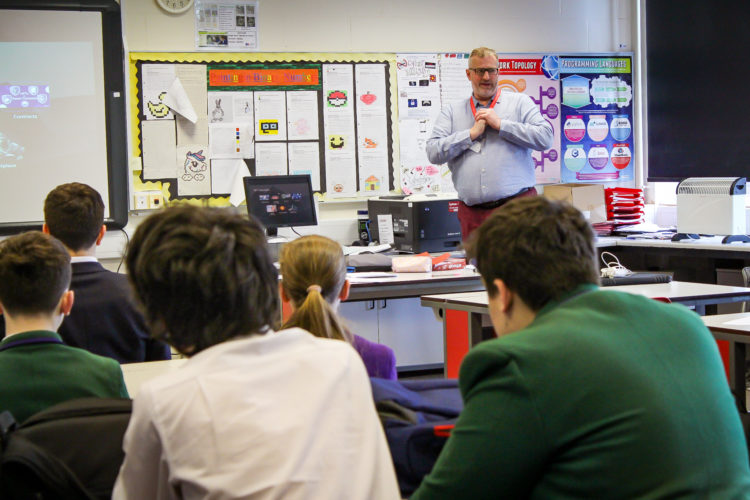 Last week, Mr McConnon, Mrs McConnon’s husband, who is a Director of Global Services at Juniper Networks, came into school on Tuesday to talk to GCSE & A level Computer Science students about Bitcoin, NFTs and the Metaverse.

The students were excited to talk to Mr McConnon and ask him about how these technologies are changing the world. He began discussing Bitcoin, explaining how it works and the effects on the “Fiat” currencies (currencies issued by the government e.g. the Great British Pound). We learned about how certain countries are adapting cryptocurrencies as official currencies such as Ecuador and Ukraine.

“I was interested in whether Bitcoin would replace traditional banks in the near future” stated Gabe.

We were then introduced to the world of NFT’s and explored the reason behind its sudden boom in popularity. Money laundering or genuine artwork? The question remains unsolved. However, NFT’s are being used not only for monkey pictures, but to have complete ownership over your creations like music.

Finally, we delved into the Metaverse. You may have heard of the Metaverse recently as it has gained a lot of traction due to Mark Zuckerberg’s almost inescapable advertisement campaigns – however, the idea of a “Metaverse” is not as new as you’d think. Games such as Minecraft, Roblox and even some older ones such as Club Penguin have pioneered this concept. In addition, Mr McConnon told us how this concept is being adapted in the workplace, such as virtual meetings (which we are all familiar with) and early builds of AR (augmented reality) glasses which are being used in skiing to help skiers navigate through terrain and stay informed about any upcoming weather hazards where a phone would not be suitable.

“It gave me a different perspective of misinterpreted ideas,” said Hannah.

All the students were really grateful to have the opportunity to talk with Mr McConnon and a very big thank you from all of us!