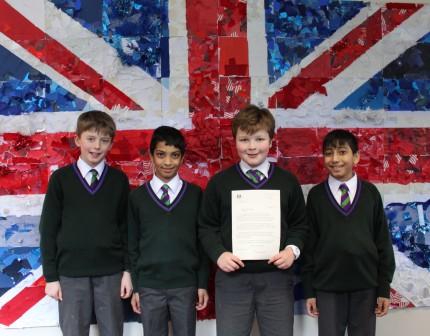 During the summer term of 2012, to celebrate the Queen’s Diamond Jubilee, staff and pupils at the Boys’ Junior School worked hard as a team to create their own enormous Union Jack. Mrs Daley had designed a colour coded template unique to each child which, when assembled together, formed a stunning piece – with everything exactly where it should be!

This whole school celebration was filmed, and entered into a competition on the Diamond Jubilee’s website, whereby students could submit a 60 second video entry in relation to the Diamond Jubilee.   Whoever got the most views would be awarded a prize.

You can view the video clip by clicking this link.   Please note that the background  music (Gary Barlow’s Jubilee hit ‘Sing’)  had to be removed due to copyright reasons.

Pictured above are just four of the boys who helped create the flag – it now hangs proudly  in the lunch corridor.

Last week, Mr Lewis received the letter pictured below, from the Lord Lieutenant’s office to say that Westholme Boys’ Junior School’s entry had won! The school have been given a cheque for £100 which Mr Lewis is going to decide how best to spend. 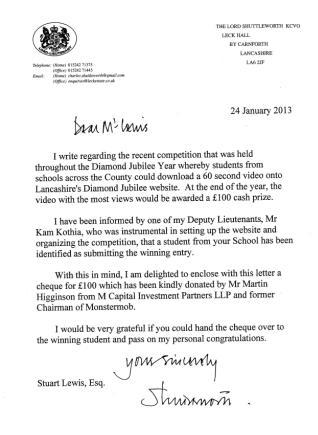 Congratulations to Mr Lewis, the staff and pupils at the Boys’ Junior School.   Your hard work and enthusiasm paid off!