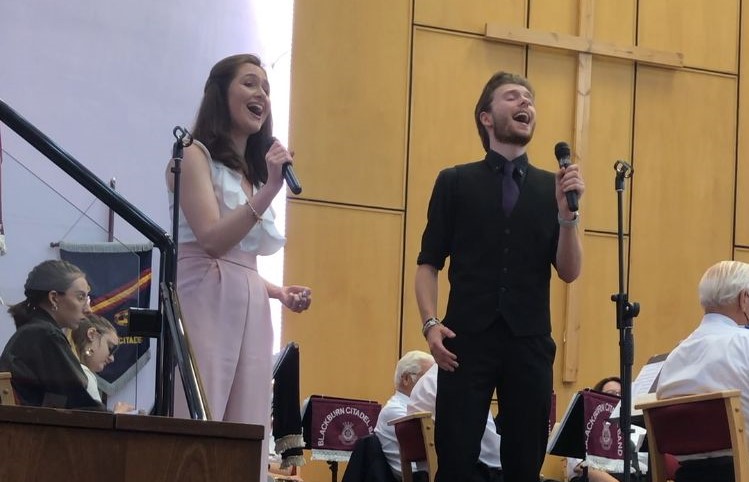 August 8th turned out to be quite a Westholme reunion when a ‘Covid Recovery Concert’ was staged at Blackburn Salvation Army.

Money was raised for vaccines for poorer countries but vocal items were presented by alumni Emily Jones and Josh Dodding with former Director of Music Eric Millest accompanying them and conducting  the Salvation Army Band.

Emily is at the Oxford School of Drama and Josh is at the Central School of Speech and Drama, so it was interesting hearing them compare notes on how their acting training was going. Like other trained actors Emily said she had to be a parrot for one and half months, with Josh having to act as a monkey at a disco on occasions!

Their solos included Think of me, The Queen of the night aria, I’d give my life for you, Losing my mind, Silent Noon and She’s good for me. Together they delighted audience by singing I see the light from Tangled and Last night of the world from Miss Saigon.

Some videos of the concert are available on YouTube below and other Westholmers playing in the band including Richard Sutlieff, Elizabeth Boardman, Keira Millest, Ben Millest, Clara Slater and Melody Goffee.

Audience members included Ellie Smith (and daughter), Lexi Smith, Cady Goffee, Harmony Goffee,  former Principal Lillian Croston and her husband plus former Chair of Governors Ken Ainsworth and his wife. The latter Fab Four were more used to hearing Westholmers perform on Summer Tours in places like Barcelona, Antibes and New York, but all involved found it to be quite an emotional experience to meet up with former pupils, teachers, colleagues and friends once again.

Future similar charity concerts are planned and anyone interesting in attending or even participating should get in contact!

Videos of the performance