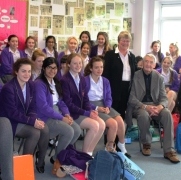 The campaign aims to make people think about the consequences of their actions, particularly whilst on a night out with friends, and the devastating effects a single mindless act can have on so many people’s lives. The students were able to ask lots of questions about the events of the night that Adam died, the court case and restorative justice. It is hoped that Mr and Mrs Rogers will come back into school at a later date to answer even more questions, as time went far too quickly. We would like to thank Mr and Mrs Rogers for giving up their time to talk to students so openly and honestly about such an emotional and sensitive issue.