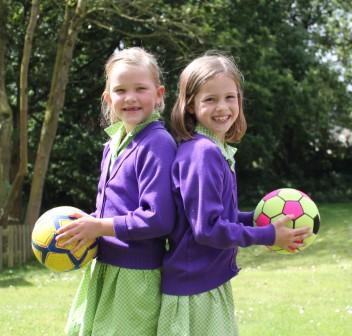 Huge congratulations must go to Year 2 pupils Sasha McTiffin and Evie Drake  who have both won a place in the Blackburn Rovers Centre of Excellence U9’s Development Squad for the 2012/2013 season.

For Sasha this is the second year she has been awarded a place but this is the first year for Evie.   They both won through the trials held over 3 weeks during June to join the 14 girls selected for the squad.

Pre-season training starts on July 16th at the Senior Team training centre at Brockhall Village with the season commencing in September when training moves to the home of the Centre of Excellence at the BRIC, Ewood Park.

Sasha and Evie have both been playing for  Langho FC U7 boys  teams  during the last season and will be moving up to the U8’s  in September.

They are both very excited!!!