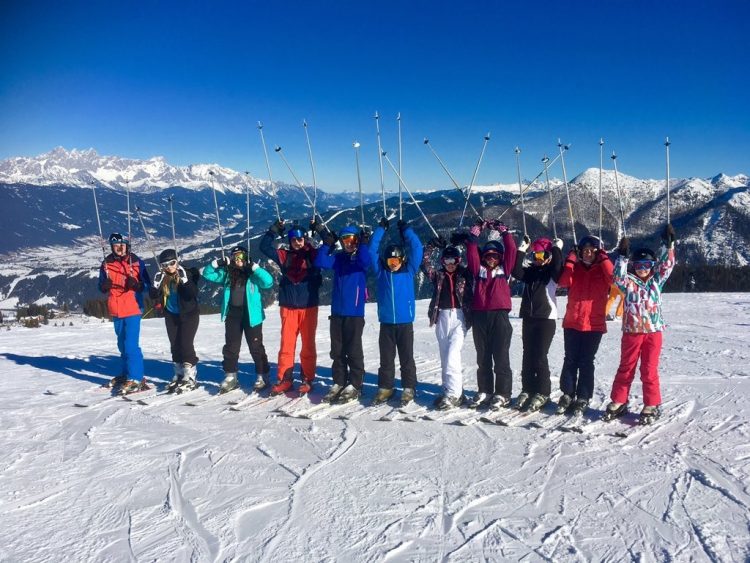 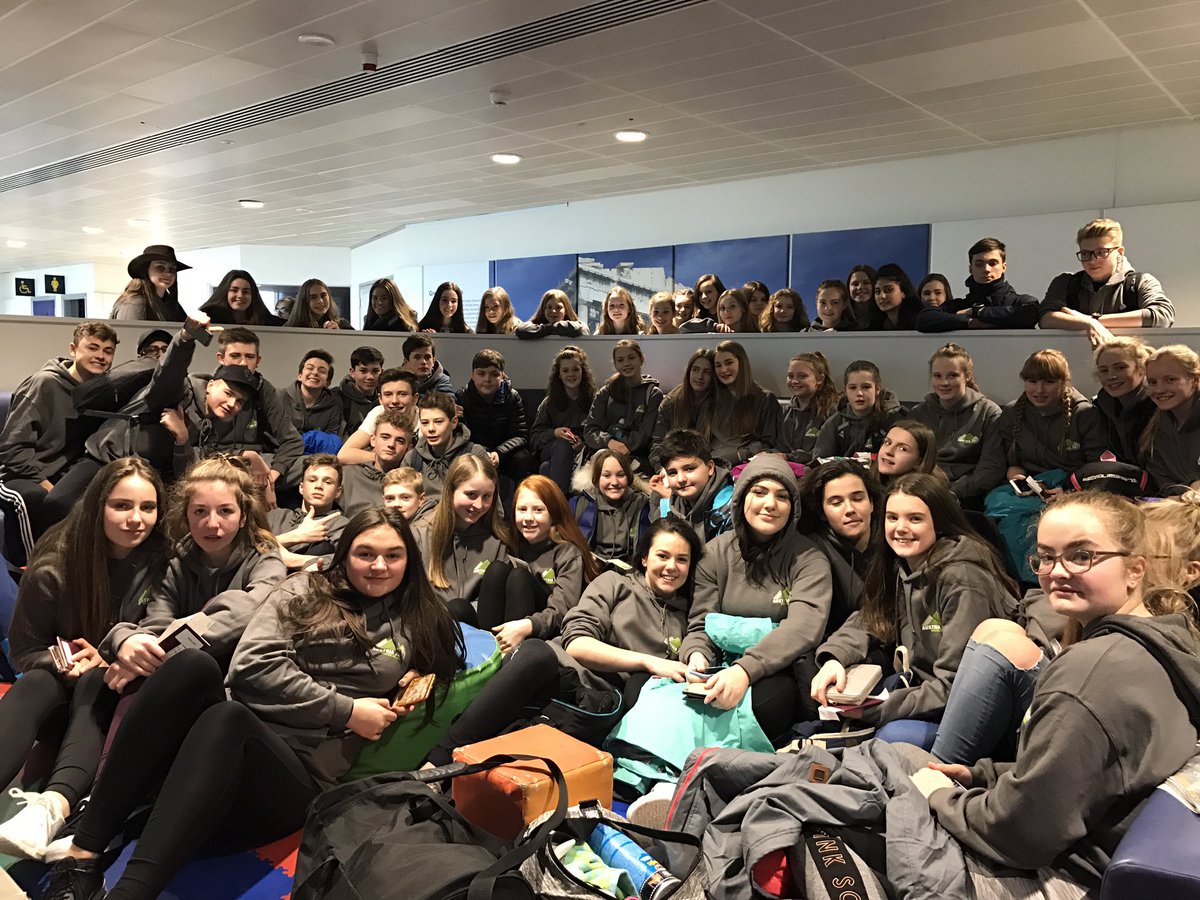 The February half-term break saw 58 intrepid students from Years 8-12 head off to the Amadé ski region in the Eastern Alps of Austria for a week of fun on the slopes. With students being divided up into groups based on their ability, from beginner to advanced, they were able to enjoy four hours of expert instruction from a team of Slovenian instructors each day. 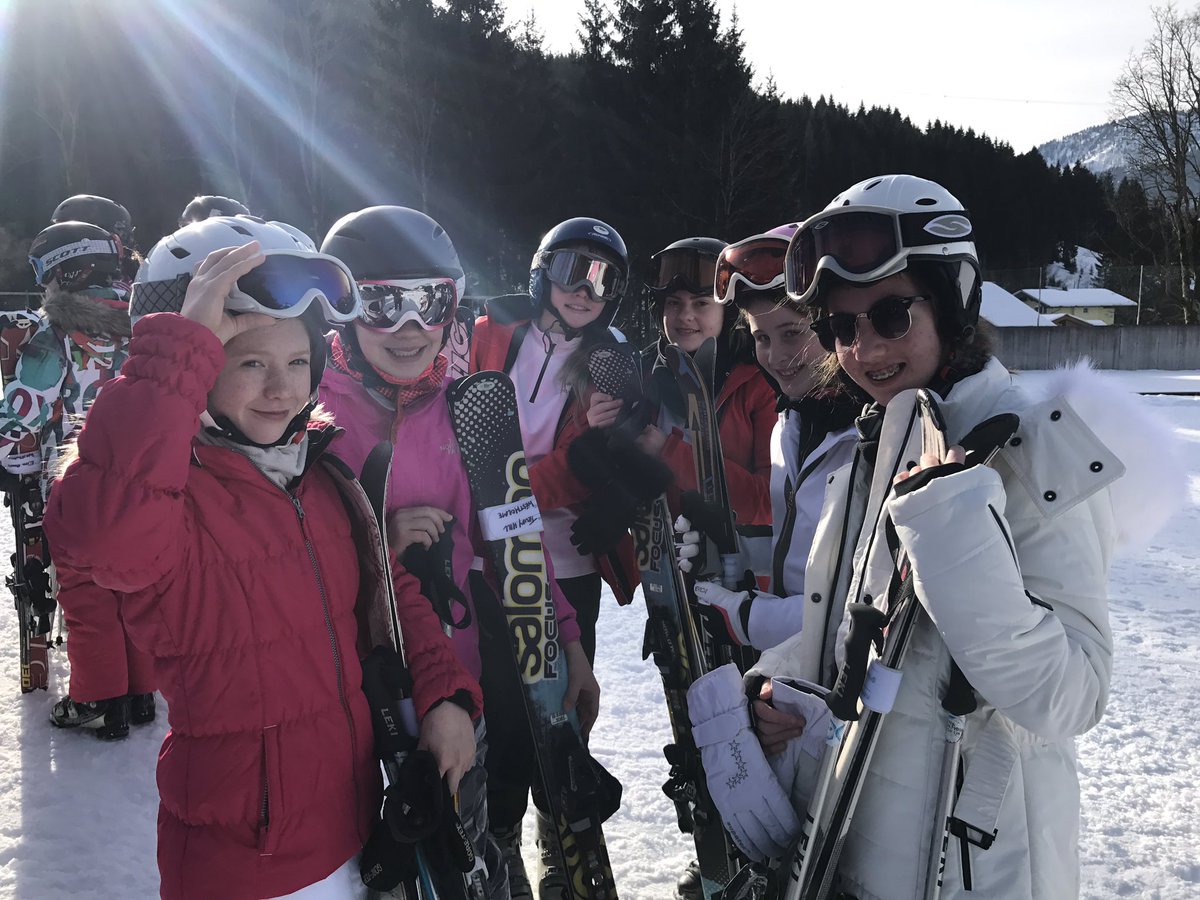 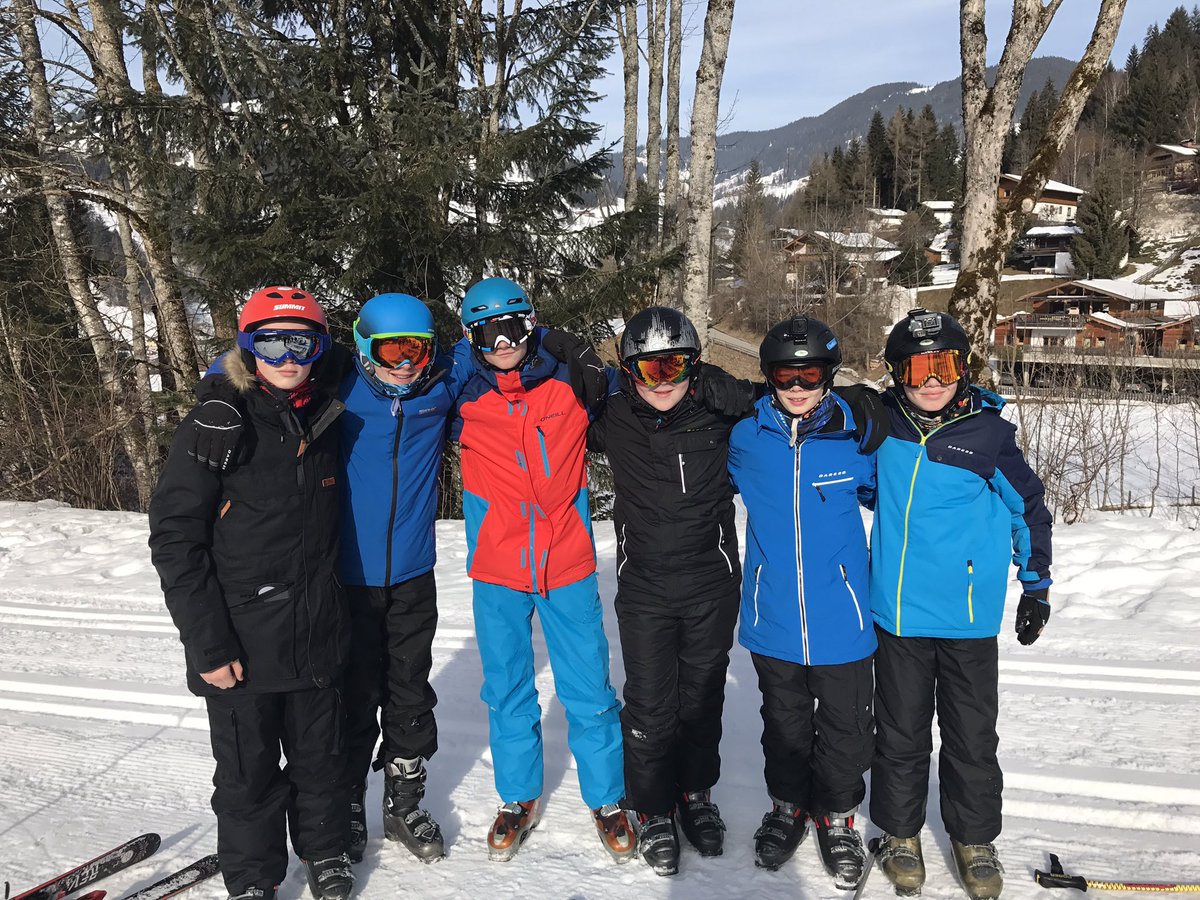 There had been plenty of snow fall in the area during the previous week which meant that the slopes were in excellent condition, and the groups were able to ski right out of the hotel and on to the lift just a few metres away. 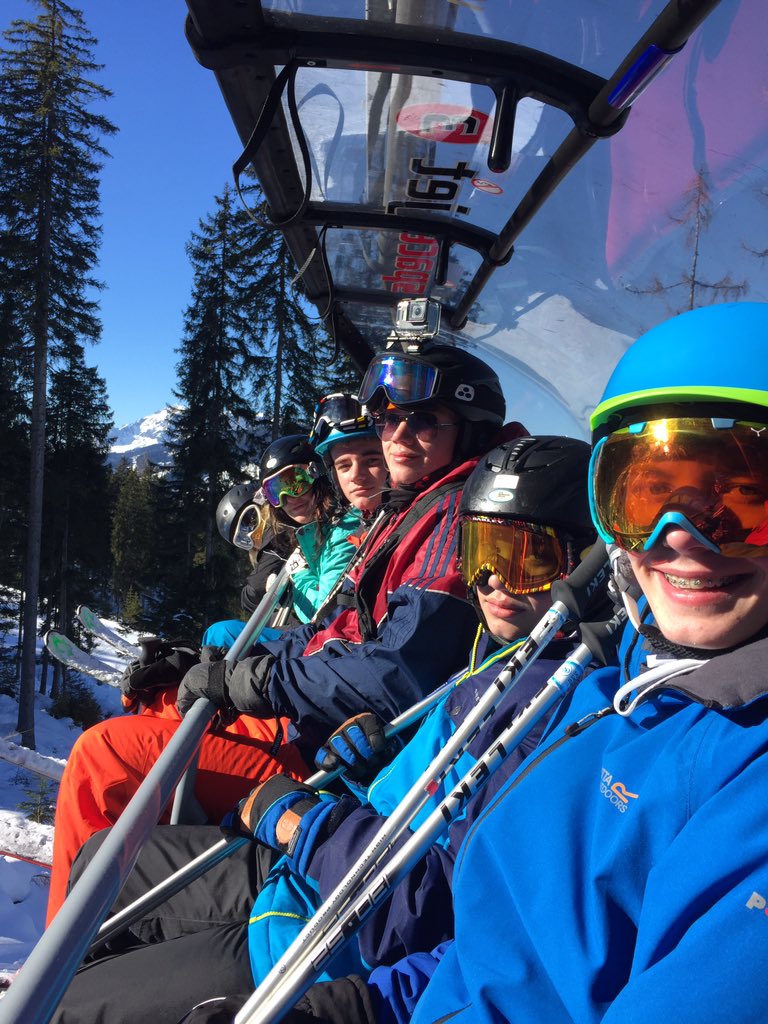 Each day the various groups reunited at a mountain restaurant for lunch, swapping stories of their exploits over hot chocolate and apple strudel. After a hard day on the slopes the students were able to explore the town of Wagrain, before enjoying a three course meal in the hotel. It quickly became apparent that no Austrian meal is complete without potatoes presented in one of their many forms. 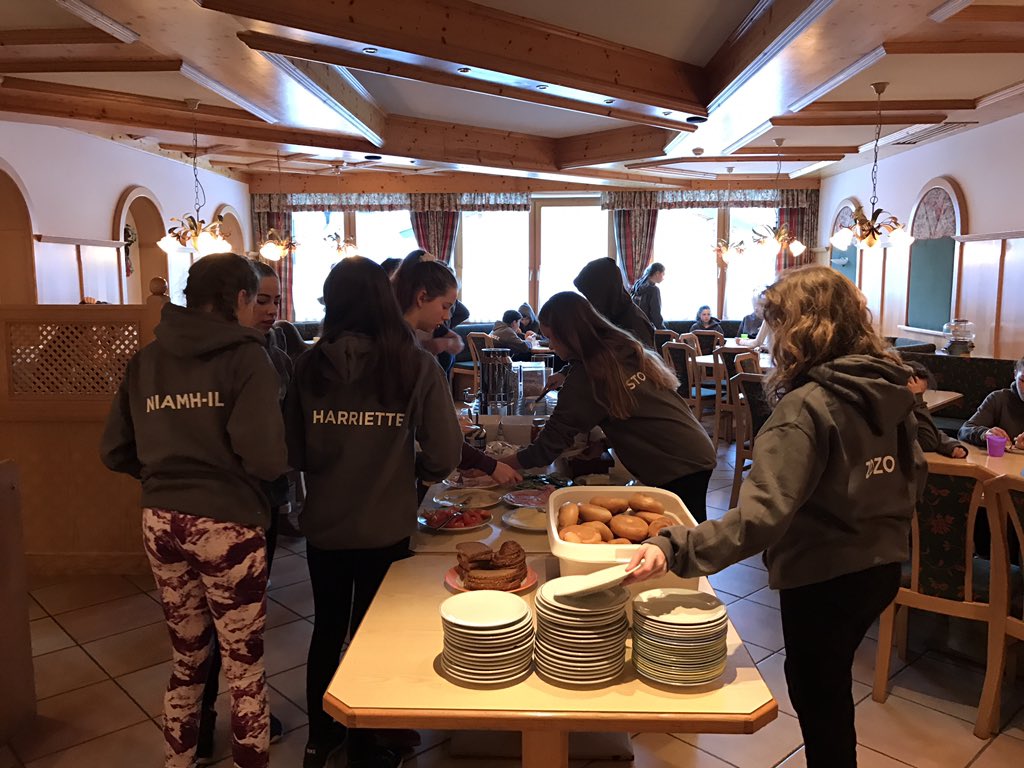 The hotel’s sports hall was put to good use on more than one occasion, playing host to epic tournaments of bench ball and hand ball. Some controversial goals in the staff versus senior students’ tournament left Mr Warburton keen for a rematch next year. Other activities included a trip to the local ice rink, which saw more tumbles than an entire week on the slopes, the nearby thermal baths complete with high speed water slides and a disco in the town of Schladming. 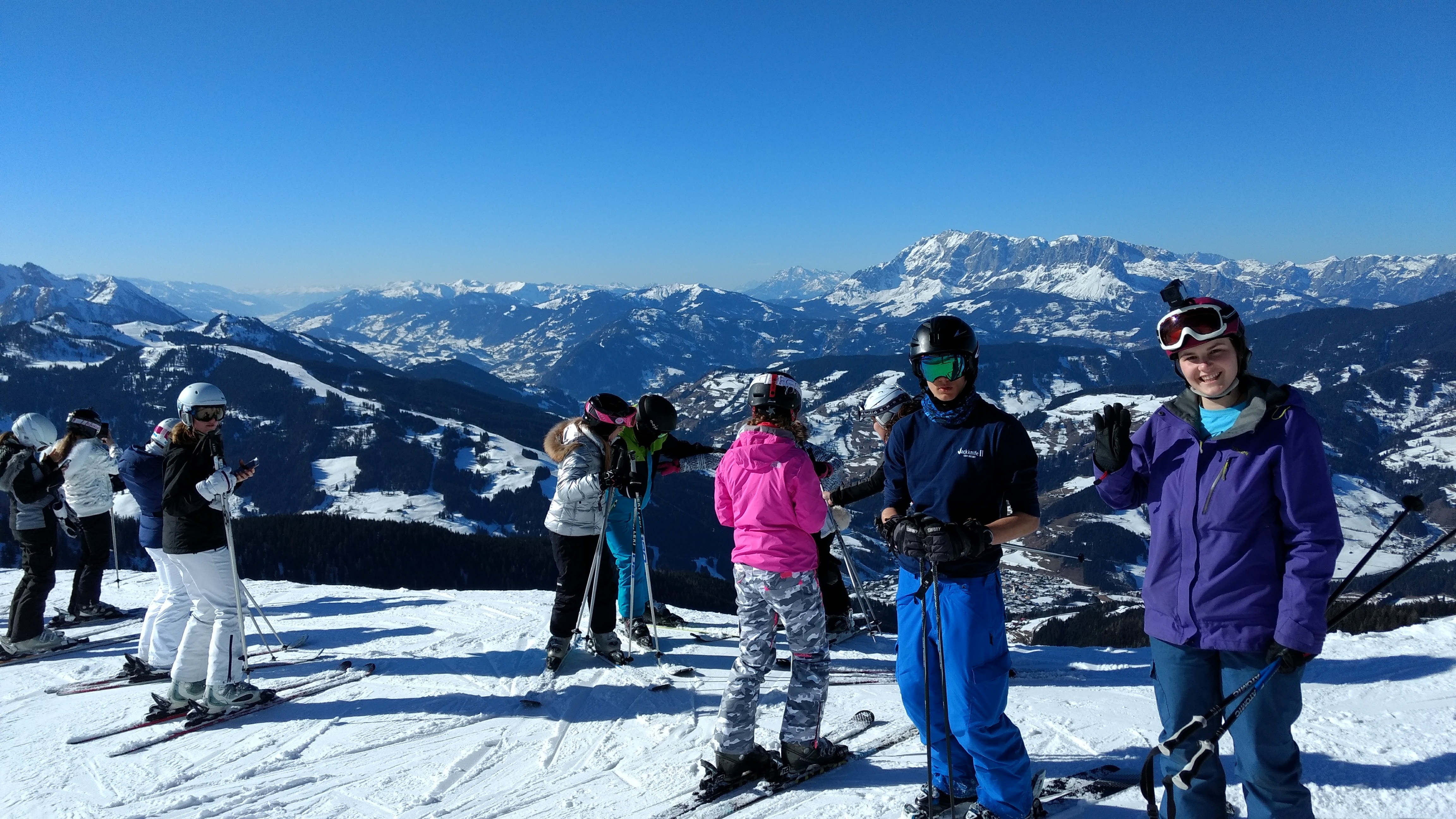 The annual Ski Trip has been taking place for many years now, and in that time several traditions have developed that have become staple activities. After each evening meal the students were asked to vote for the day’s Wally. People were nominated for various acts of ineptitude such as putting on the wrong boots, forgetting to pick up essential equipment before setting off skiing, heading out into town in just a t-shirt, and for constantly losing their ski group on the mountain. The winner would then have to wear the infamous orange Wally hat for twenty four hours, whilst adding their own unique decoration to the hat before passing it on to the next recipient. 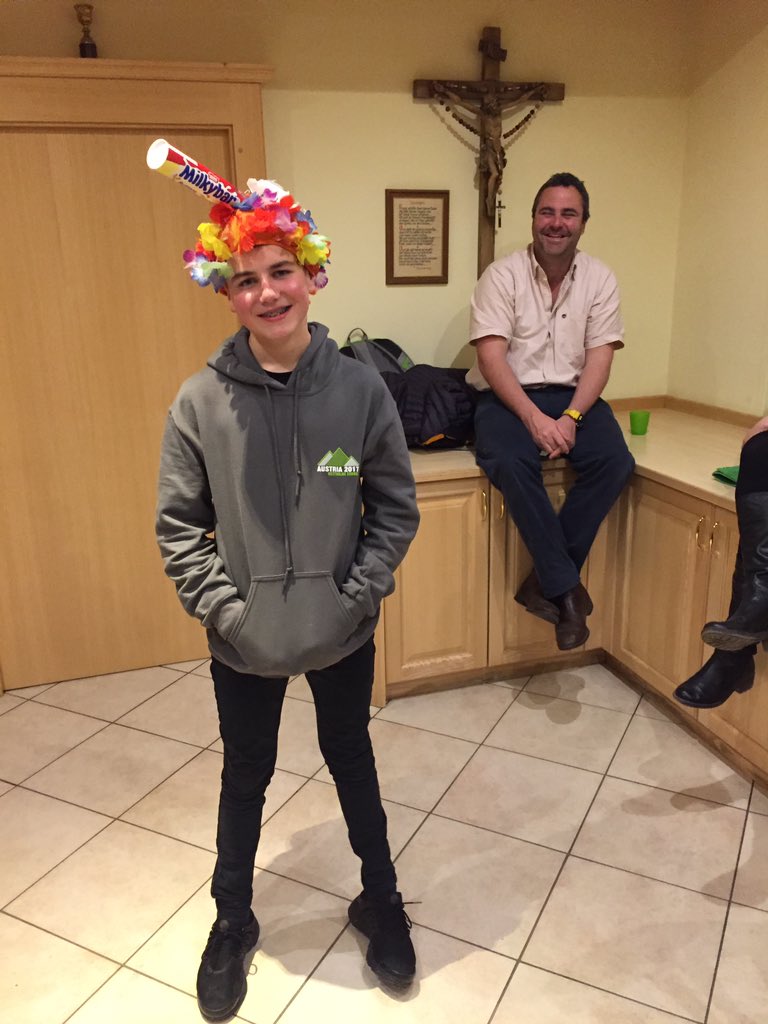 For once no staff members were elected to wear the hat, but congratulations (or commiserations) must go to this year’s Wallies: Dominic Naylor, Finlay Shepard, Maddie Rogan, Max Chester and Christie Sturgess. Dominic deserves a special mention for setting the precedent of being chosen to wear the hat on two occasions in one trip. Prizes were also given out each day to students who had been especially kind and helpful during the day. Nominees included Katie Redman, Sam Hall, and Ute Schmitgen who helped out fellow students and staff. 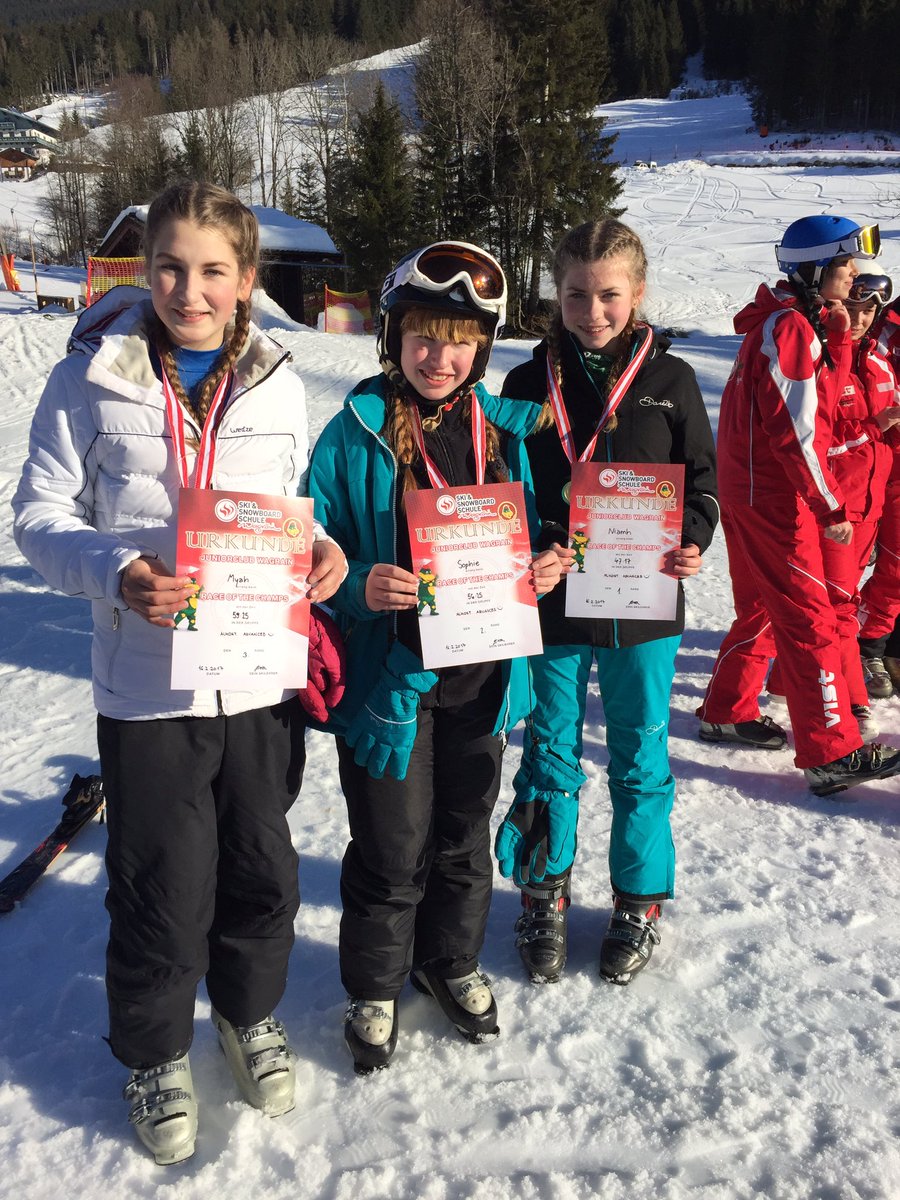 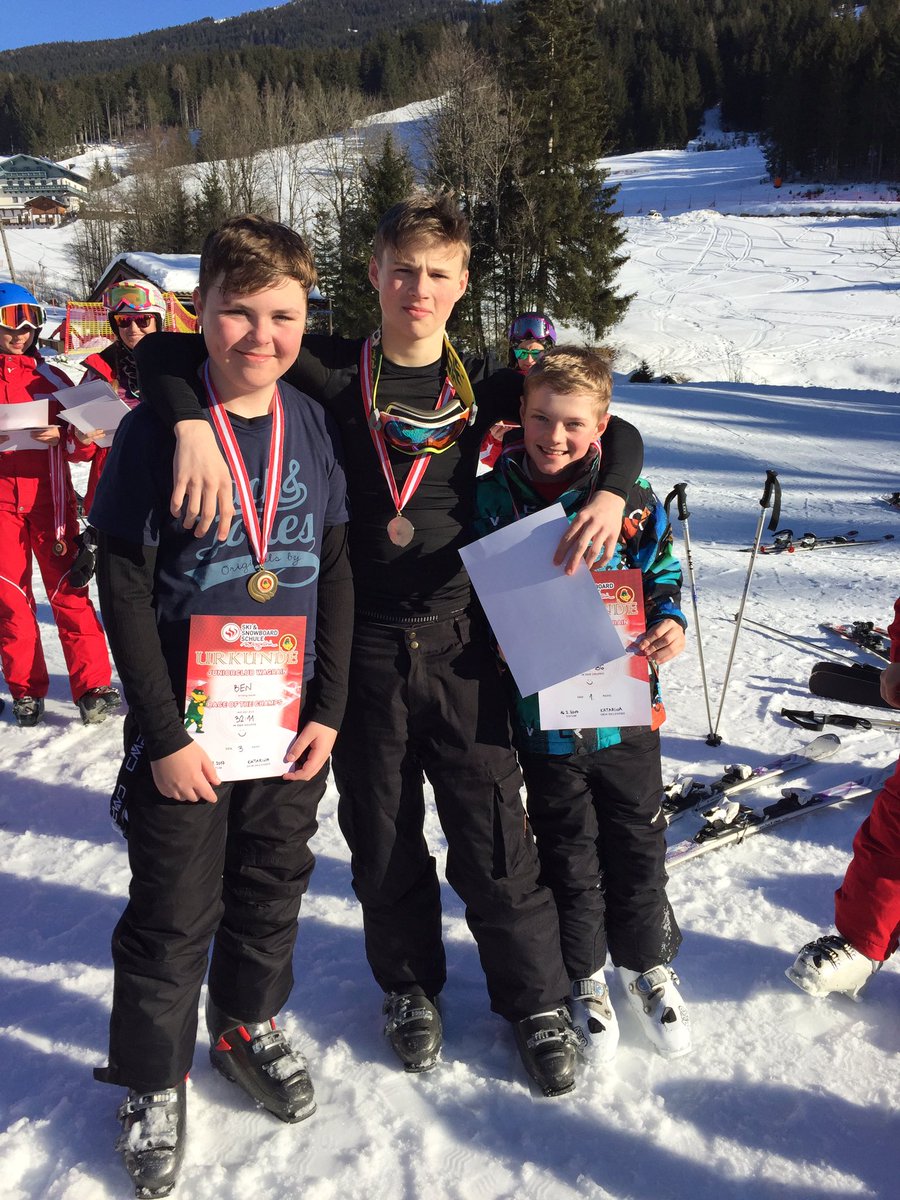 The penultimate day of skiing saw a timed slalom race take place. Medals were awarded to the fastest skiers within each group, but everyone came away with a certificate stating their time. Fastest time of the day went to Sam Hall, who wanted to set the record straight after a disappointing third place last year. Mr Warburton employed his trademark “tuck and hope” style to take the win in the staff competition and in doing so earned the nickname “Warb speed”. 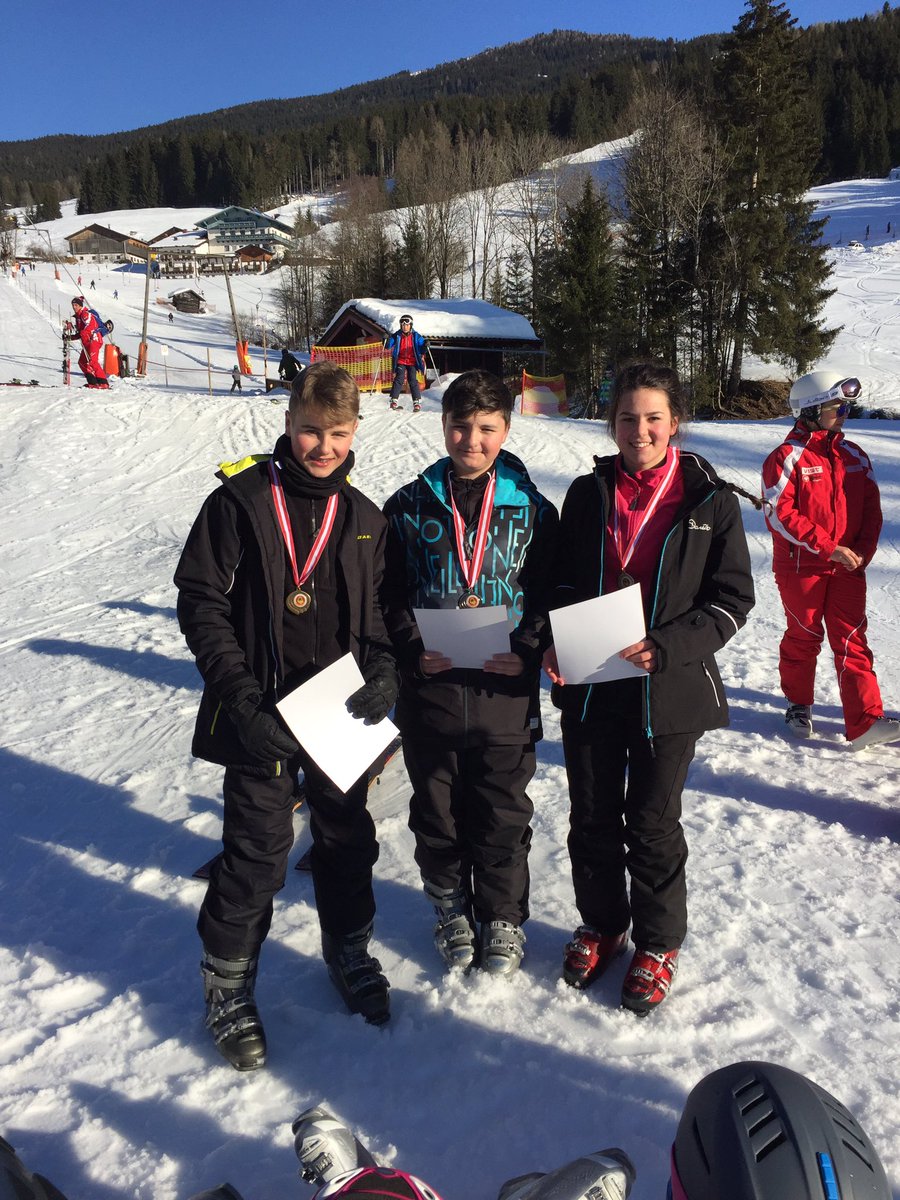 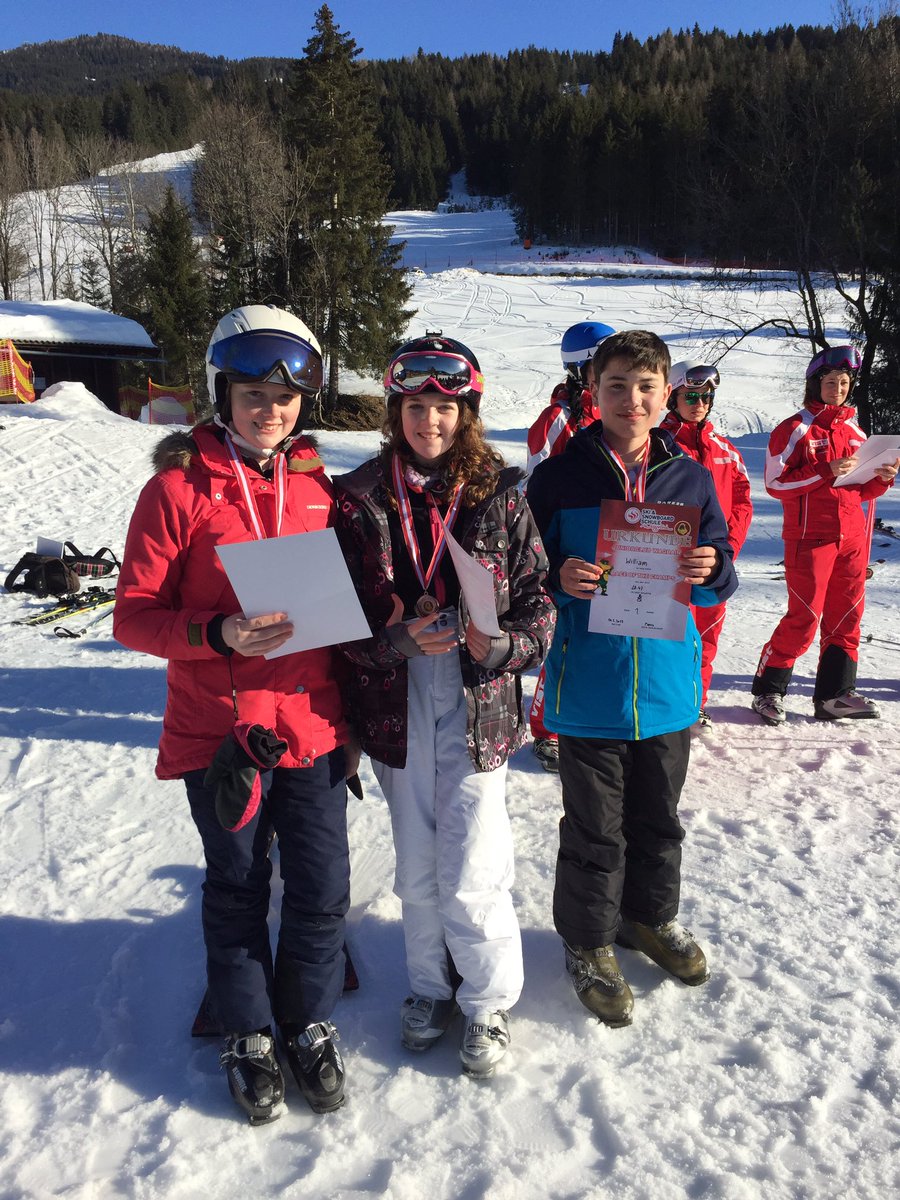 Despite rising temperatures during the week the final day of skiing saw fresh snow fall, which made for more challenging skiing for some, whilst others revelled in the layer of powder that was rapidly forming on the slopes. After the skiing was over, all agreed that it had been an amazing day, but that the week’s activities were finally catching up with them. 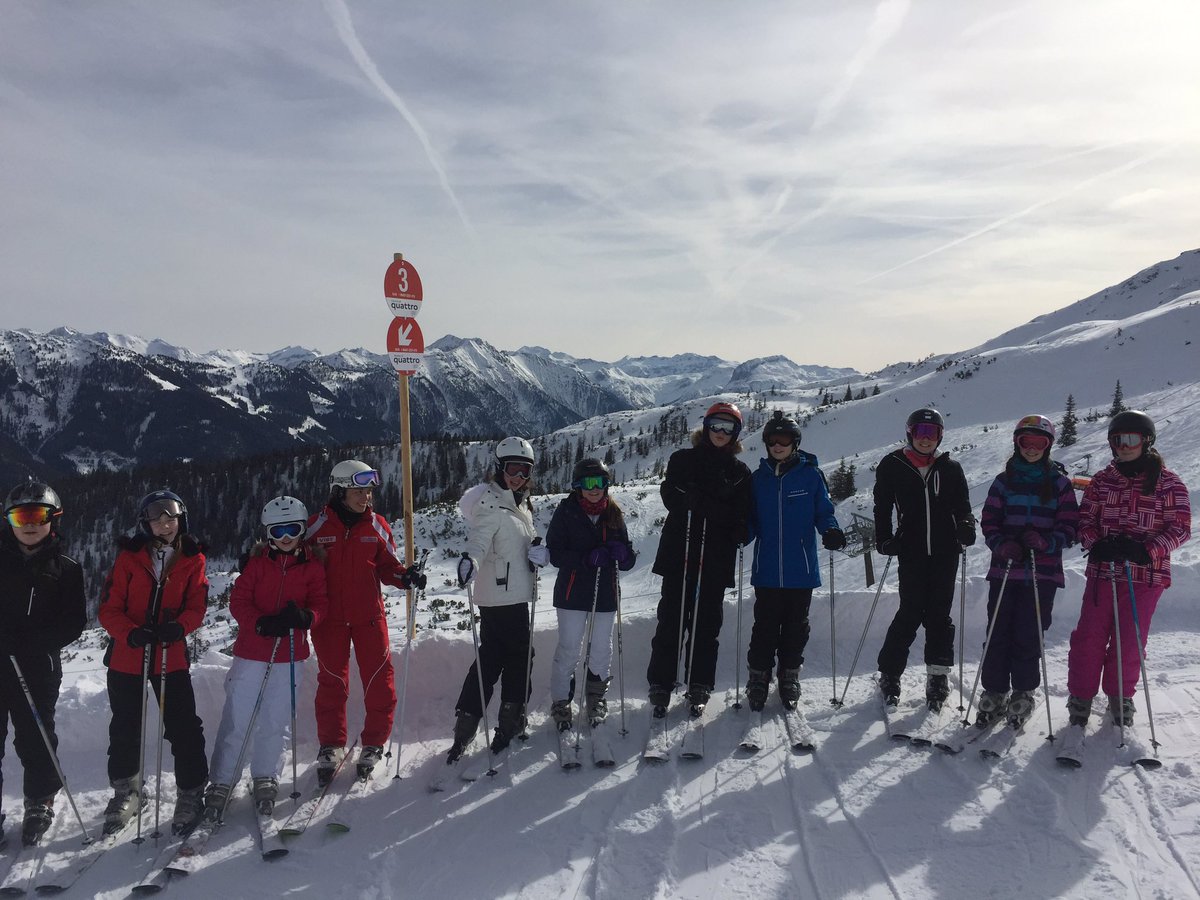 The final evening saw the annual Hotel Service competition in which students had to present their rooms in the style of luxury hotel accommodation and give a team of teachers a tour as if they were guests. Extra points were awarded for chocolates on the pillows, towels folded into the shape of swans, drinks chilled in a bowl of snow, and dance performances. Although the original plan had been to reward the winning room with pizza, the standard of the entries was so high that all students earned their slices. 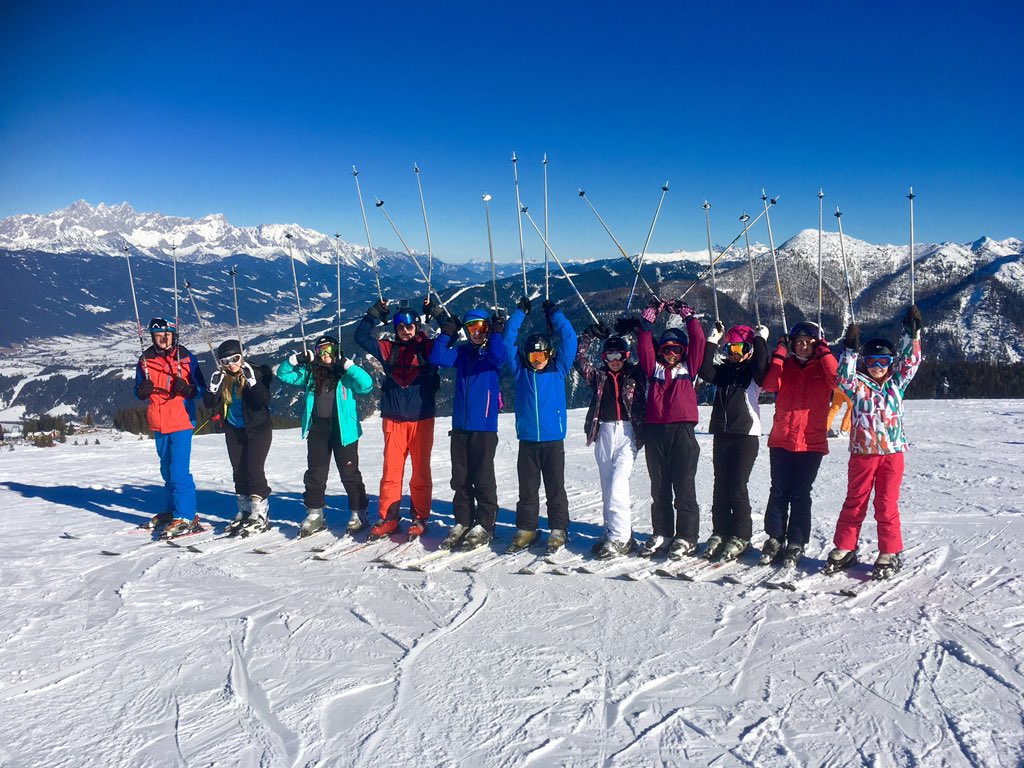 The final morning saw a final series of awards for the most improved skier within each group, the ‘Best Friends With The Ground’ award for the most frequent faller, and the newly christened ‘Warb Speed’ award for the highest top speed registered using the Ski tracks phone app, which went to James Hartley. The students had also taken it upon themselves to buy gifts for the staff for their help throughout the week,with a special mention going to Miss Furness for organising the trip. The final day was spent souvenir shopping in the town before taking a coach to Salzburg airport. The group arrived safely back at school tired and relieved, but already looking forward to next year’s adventures on the slopes.

A huge thank you to Miss Furness for organising the whole trip and the staff who accompanied the students, although some of them have a few bumps and bruises!