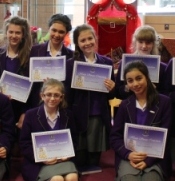 Year 8 EPR students showed wonderful creativity in the Hindu Shrines competition, and concentrated their efforts into making shrines which captivated all five senses.   There was an amazing array of colourful creations on display and everyone should be congratulated on their fantastic effort.

Highly commended certificates were awarded to the following pupils: