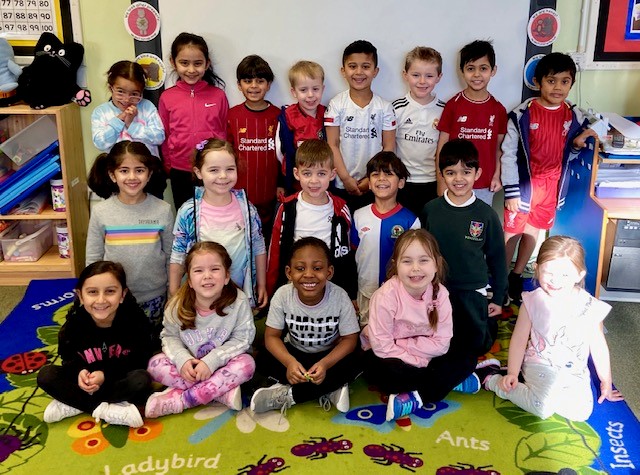 On Friday children in Infants and Juniors paid a pound to come into school in ‘home’ sports kit to raise money for Sport Relief.

The message from Sport Relief is that: ‘sport is powerful. It can bring us together, get us moving and make us shout at the TV or hug a total stranger. ‘Sport Relief was created to harness that power – that passion – and raise money to help people who need it the most, no matter where they are – in the UK and around the world. Sports Relief work hard to find the best, most effective organisations here in the UK and around the world who are taking on the issues of mental health, child poverty, domestic abuse and helping people have a safe place to live. And when they find these organisations, they invest in them and their incredible work. It’s a simple idea which can have huge impact – just like sport itself.

On Friday the Infants and Juniors culminated their focus on sport and fitness that began earlier in the week. On Monday Mr Haworth showed an inspirational film to the children to get them in the right frame of mins to think about health and fitness. Year 6 planned and made up games which they then taught to the rest of the year groups on Friday. In swimming all children from both Infants and Juniors tried to ‘swim the channel’ and they managed to cover an astounding 24.88 miles which means they made it to France!

The action did not stop there, however, with all children from Nursery to Year 6 taking part in a running, walking and waddling challenge on Friday. The infants covered 67.8 miles which is an extraordinary achievement and the Junior students ran an amazing 233.25 miles which is like running from Westholme to Buckingham Palace! I think they proved at Westholme that Sport Relief is a great way to get your whole school moving and having fun together and by joining in, they helped to raise money to change lives across the UK and around the world – what a worthwhile day!