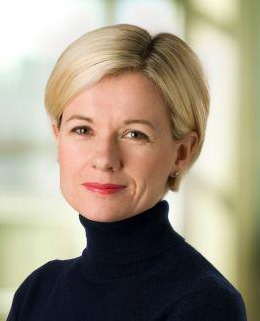 What do you do now?
I currently work for the Bill and Melinda Gates foundation in Seattle. I am a member of their executive team with responsibility for communications and brand. In the New Year I am moving home and role, splitting my time between New York and London to run corporate affairs for Pearson, the largest education company in the world.

How did you get into this line of work?
I have always been interested in communications and advocacy and after college worked as a researcher in the House of Commons. Before joining Gates I worked in the private sector taking on increasingly broad communications roles in pharmaceuticals and banking.

Have you ever encountered any prejudice or unfairness because of your sex?
I went to Magdalene College, Cambridge the first year women were admitted. It was the last male Oxbridge college to go mixed. I went back to Magdalene a couple of weeks ago to celebrate the twenty-fifth anniversary of the college accepting women and spoke on a panel about the experience of being in that first year. I have great memories of my time at Cambridge, but listening to the other panelists reminded me of the resistance at the time from an element in the college – members wearing black armbands, quad lawns killed off with pesticide in protest and the formation of the Black October Society. The animosity didn’t last but I think it made me think alot about gender equality, which has shaped many of my career decisions, from volunteering for the Fawcett Society straight after college, an organization set up by Hilary Clinton when she was in the White House to empower women in business, politics and civil society.

What does it take to be successful?
I would say three things:

– Investment in building great teams and the importance of being a team player – success is nearly always a team effort.

– Resilience. You will take some knocks along the way so belief in yourself and your abilities is key to success.

Any advice for Westholme pupils?
Madeleine Albright said that there’s a special place in hell for women who don’t help each other – there still aren’t enough women in the front line of politics, business, or media and the only way the next generation of women is going to break through is if they have the support of strong peer networks. It’s never too early to start building your network!