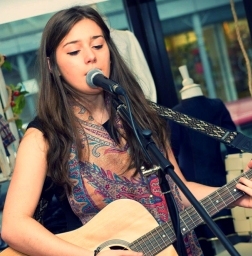 We are thrilled to learn that Sixth former,  Jade Jones has won a place to play at the Cambridge Folk Festival from 25th to 28th July.   This huge festival, covered by the BBC, celebrates folk music and diverse folk artists.

Jade originally applied by submitting three of her own original songs.   Competition for places was immense,  but the organisers said that they awarded Jade a place because they were impressed with her beautiful voice and found her simple accompaniment incredibly interesting to listen to.   Jade has been selected to form the core of the festival hub band.

In addition to Jade’s performance on Sunday evening, she will be mentored by other musicians.   We cannot wait to see you on tv, Jade!