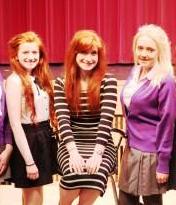 Former Westholme student, Liz Singleton who is currently performing in ”˜Les Miserables’ in London’s West End, returned to the Westholme Theatre to deliver a master class in Musical Theatre to Drama pupils from Year 11 and Sixth form. Pupils were given professional advice on how to perform character through song and we saw talented students  Eve Jones, Jade Jones, Emily Jones and Hannah Dagnall deliver some exceptional performances.

Liz also performed a heart-breaking rendition of ”˜On My Own’ to a delighted audience, then completed the afternoon with a powerful rendition of ”˜Don’t Rain on My Parade’ to rival even the famous Barbra Streisand!

Liz will be returning to Westholme in next year’s Concert Series to perform songs from her favourite musicals. She will also star in the touring production of Craig Revel Horwood’s ”˜Fiddler on the Roof’ from September 2013.