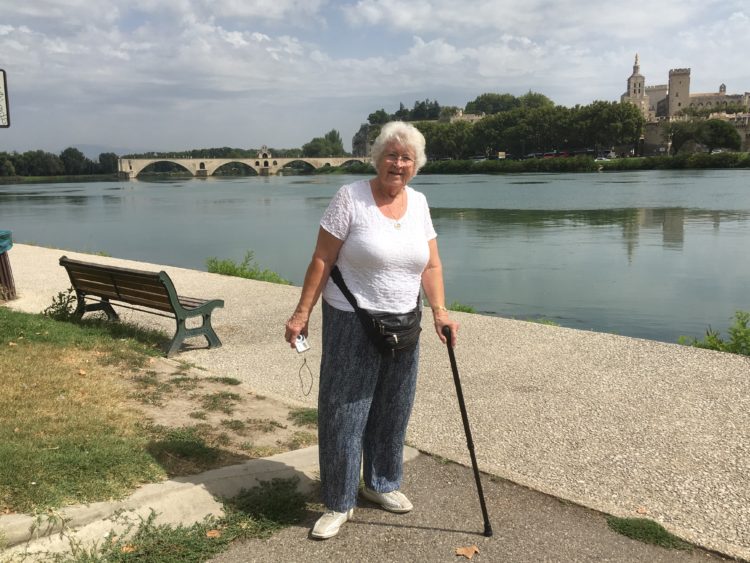 We were saddened to hear the news that Mrs Patricia Cave, a former Deputy Head, has passed away following a short illness.

Mrs Cave held multiple roles at Westholme including Head of French, Head of Sixth Form, and became Deputy Headteacher in 1996 – a role that she excelled in until her retirement in 2000.

Many years ago, speeding northwards through the middle of France my husband and I came up behind a car we recognised. A closer look as we overtook confirmed our surprise. It was Mr and Mrs Cave. We flagged them down and as it was nearly lunchtime we stopped for a picnic together at the next service area. Seated comfortably on a grassy patch, I produced our sandwiches as Pat laid out a banquet for her and Mike right down to cutlery and even a salt and pepper pot!

Mike regaled a happy story of how they had been in Annecy and visited the same café each morning for coffee and how Pat had enjoyed chatting in her perfect French to the waiter. Towards the end of the week the waiter, who had observed them and who spoke some English said to Mike, “Doesn’t your wife speak good English?”  He clearly thought that Pat’s accent must make her French!

These recollections say a great deal about Pat. Her love of France, her high standards in everything she did, her tremendous organisational skills right down to the last detail and her outward cheerfulness, friendliness and good humour.

Pat attended Blackburn High School as a pupil and went on to study modern languages at Manchester University. She joined Westholme in the days of Mr Rouse when it was a small school which had recently moved to Wilmar Lodge in the late sixties. Pat saw three decades of pupils through the school and was instrumental in establishing and building up its strong reputation in the locality. Initially she taught French but in order to fill her timetable in those early days she took on some Home Economics teaching too. She later became Head of Modern Languages, then Head of Sixth Form and finally Deputy Head. Pat had an encyclopaedic knowledge as she read widely, had an instinctive curiosity and determination to always get things right. All this was coupled with outstanding practical skills as a cook, a baker, an embroiderer and a flower arranger. It seemed to me that there was nothing she could not do.

When interviewed about their career aspirations many Sixth Formers quoted Mrs Cave’s name as their role model. Pat inspired them. She insisted on high standards not only in academic work but also in personal behaviour – neat and tidy appearance, punctuality, attendance and commitment to school events. She worked very hard for them, cared about them and their futures and they, in turn respected, trusted and loved her.

Pat’s sound common sense in all things ensured good judgement. Calm in a crisis she could always see the funny side of things and had a great sense of fun.  She often used laughter to ease tension and pressure. For many years she was our prompt for school productions and gave up her evenings to sit back stage meticulously following the script and being an excellent judge of when to step in with a reminder.

Pat retired from Westholme some twenty years ago and recently moved to Rainton in Yorkshire to live nearer to Katy, her daughter.  I visited her last, in March this year when she had suffered a fall and broken her wrist. It was typical of Pat that when my husband and I arrived unannounced we found her on her knees in the back garden pulling up weeds with her good hand! Resilience and a positive outlook prevailing! Pat was cheerful and optimistic as usual and there was no sign of the terrible illness that was to afflict her in the following two months.

Sadly, Pat was taken into St Michael’s Hospice in mid-May and deteriorated rapidly, dying on the 2nd June. It is good to report that one of her last conversations was with Mrs Bobby Georghiou where they discussed the French subjunctive amongst other things. Pat teaching French to the last!

Pat had a strong Christian faith and gave interesting, insightful and uplifting assemblies. She was strong until the end and one of her legacies for me was the short prayer she found in a church in Scotland which she brought back and taught us to sing to the tune of “Edelweiss.” We all had it in the front of our hymn books and I used it regularly in my Tuesday’s assemblies which were otherwise dominated by sporting, musical and other presentations. We called it Mrs Cave’s Grace.

We are all saddened by the loss of a great lady, teacher, leader and friend who had an indomitable spirit. I am glad of this opportunity to pay tribute and give enormous thanks for a life which touched and inspired us all.

I joined Westhome in 1973, when the staff at Upper School numbered exactly twenty. The very small staff room was by the old courtyard, where the Science block is situated. Newcomers had to stand by the door to drink their break-time coffee. Mrs. Patricia Cave was a commanding presence, even then, a guiding light, a stalwart who gave the school its heart and its backbone. You dared not sit in one of the hallowed seats, but you were grateful for guidance, whilst being apprehensive about acting to the detriment of Westholme ‘s ethos and principles.

Throughout her long service to the school, Mrs. Cave (we addressed each other by our surnames for years) maintained high standards in her career. She was an excellent French teacher, a Sixth Form tutor, a senior teacher, examinations officer and finally Deputy Head, working alongside Mrs Roberta Georghiou, with whom she became firm friends. I found an old Sixth Form year book from 1995, in which Pat was interviewed about her likes and dislikes, and so on. She listed her plans, which were to make progress with IT, to get her paperwork under control, and to learn new skills. Her likes included the sights, sounds and smells of France, enjoying a favourite Alpine café, and seeing the first snowdrops. Dislikes were deceit, and people who waste opportunity. She recollected an incident where having ceremoniously started an examination in the hall, she sat down and the chair collapsed, leaving her and Mrs. Wilcock unable to stop laughing. Pat’s own words here sum her up nicely – open to new ideas, loving nature, hating wasters and cheats, and able to laugh at herself.

She had many talents and interests beyond school, from baking wonderful cakes to a deep faith and practical involvement with the church. Indeed, she left a lasting legacy with her introduction of a little prayer sung to the tune of ‘Edelweiss’ and known ever after as  ‘ Mrs. Cave’s Grace’. She began a new life a few years ago when she made a brave move from Blackburn to a little village near Thirsk, where she became involved in the local community and was very happy.

Such characters have made Westholme what it is today. Mrs. Cave is up there with the best of them. Commiserations to daughter Katy, herself a former pupil and now following her mother’s footsteps in the teaching profession, and son Andrew. Pat will be much missed in every way.
E. Gibson