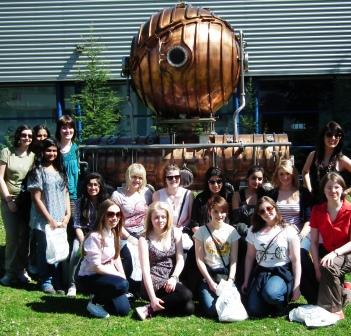 Sixth form physicists took off for Geneva recently: their destination CERN.  This mind-blowing trip included a three hour tour of the CERN site and a lecture in the state of the art conference suite.  Girls learnt about the evolution of accelerators, looked at replacement sections of the accelerator undergoing testing and saw how tiny superconductors could replace huge copper cables.

With a site so large the party had to use a minibus to travel around the site, but everyone was glad to rest their brains for a short time over lunch at Restaurant Number 2.  But the let-up in the quest for knowledge continued and the group entered the first of two huge interactive displays where everyone had a chance to contain particles in magnetic fields, feel the attraction between quarks – plus much, much more.  A brief spell in the sunshine to reflect upon what had been learnt and then back inside a futuristic dome with spherical displays to interact with and weird chairs to relax in!  Then, without warning, the walls, the floor and the ceiling turned into giant screens as the evolution of the universe from the first instance of time unfolded all around – a magnificent experience which left girls floating in the beginning of space and time! 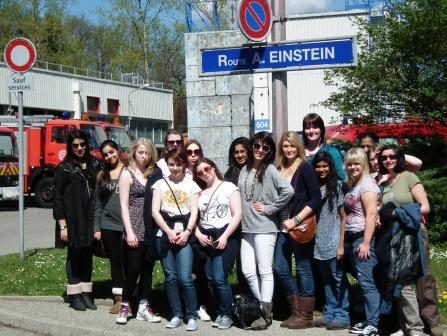 The remainder of the trip was less mentally taxing.  The party travelled out of Geneva and up into the mountains on the Saleve cable car.  Being physicists, the girls marvelled at the dispersion of white light through the 125 metre high fountain in the lake – and at the runners racing up the mountain in temperatures of 25­­oC!  And even physics students need a little time for shopping and ice cream which they enjoyed before enjoying a quiz by the illuminated lakeside as darkness fell.    All agreed that it was a most memorable trip!