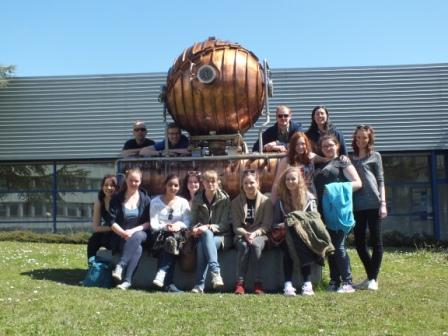 A trip of a lifetime for Westholme’s Physics students

It’s what time?   I thought as my alarm rang out at 1.15am on the last Friday of the Easter holidays.   I probably wasn’t the only one thinking this in the Westholme world, as by 2.45am, ten sleepy students, four staff and some very weary parents came together on the Westholme car park to load the minibus for the trip of a lifetime.   Breakfast in Blackburn, lunch in Geneva!

Having dropped our luggage at the Geneva Youth Hostel, we made our way to Saleve mountain, marvelling in the efficiency of the free public transport system.   As we boarded the cable car it quickly became apparent that some people were happier with heights than others!   Once at the top there were beautiful views of the whole of Geneva, the snowy Jura Mountains and the Alps, despite the grey skies and the occasional rain shower.   With such amazing views and a children’s playground, who could be happier than a bunch of Physicists pushing the design envelope of springy toys and eating ice cream.   A walk home along the lake, beds made and a much-needed meal saw the whole group in asleep very early, although some managed to stay awake long enough for an evening stroll.

The following morning was Sophie Ward’s 18th birthday – and what a way to spend it!   Following an early breakfast, we made a quick getaway to CERN.   Travelling through beautiful morning sunshine, we arrived early at ”˜Building 33′, clearly labelled by a scientist.   A very informative presentation told us about the history of CERN and that it should really be called EUNR, but that doesn’t sound as good.   We then had a revision session on subatomic particles before the news we had all been waiting for: Sophie was to spend her 18th birthday 100 meters underground in the Compact Muon Solenoid detector – something very few people in the world would ever be able to claim.     We then toured the site for two hours with our fantastic guides who showed us superconducting materials, radio frequency accelerating tubes, octopole magnets and much, much more before we climbed into the safest lift in the world and descended into the depths complete with hard hats to the CMS.   This is a huge detector (thousands of tonnes) built on the surface and lowered 100m down a shaft with no more than 20cm clearance.   Its weight is such that wheels cannot support it so it has to move on high pressure air, rather like an enormous hovercraft.   With brains starting to fade, we retired for lunch into the imaginatively named ”˜Restaurant 1′, discussing all the amazing sights we had seen so far.   The afternoon was to continue to push our levels of understanding and appreciation of the work being undertaken at CERN as we toured the interactive museum and went back in time in the giant wooden globe, where we floated in time and space from the beginning of the Universe to the present day.   After dinner we were all exhausted and finished the day with a walk to the lakeside for a gentle evening of birthday cake and a quiz. 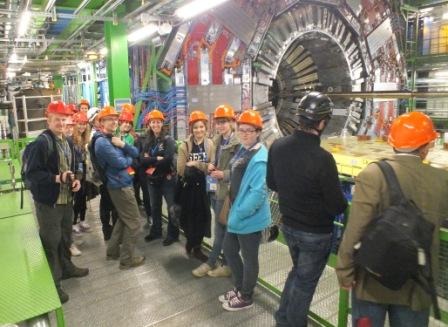 The remainder of the trip was spent enjoying the sights of Geneva: a boat trip on the lake; a walk around the old town and Saint Peter’s Cathedral; a visit to the famous flower clock; ten pin bowling.   Finally, we rounded off the trip with some serious shopping in the exquisite (if rather expensive) chocolatier.     We finally returned to school at 7.30pm on Monday evening after a trip that will remain with the students for the rest of their lives.

Please click here for a CERN 2013 Gallery of photgraphs