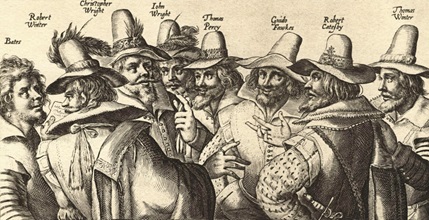 It is November and the time of year when we reflect and mark two very different times in our British history. On 5th November we celebrate and remember the foiled attempt of the Gunpowder Plotters in 1605 to blow up the Houses of Parliament. On 11th November we mark Armistice Day and then commemorate the fallen nationally, on Remembrance Sunday. They are two very different occasions but both have great significance for our country and the context of our national heritage. It is crucial that young people learn and understand the importance of such events and at school we have a mission to ensure this goes far beyond facts and figures, encouraging reflection on the freedom that we enjoy in Britain today.

We study the Gunpowder Plot in our history curriculum. The whole concept of celebrating a terrorist act with fireworks and burning an effigy of Guy Fawkes on a bonfire does seem very un-British and somewhat uncivilised – and yet we did this across the country at the weekend. In our studies the focus is upon the political motivation of the plotters, broader religious background and the discovery, subsequent arrest and punishment of the conspirators. When Protestant King James I acceded to the throne, English Catholics had hoped that the persecution they had felt for over 45 years under Queen Elizabeth I would finally end, and they would be granted the freedom to practice their religion. When this did not transpire a group of 13 conspirators resolved to blow up the King and Parliament to protest.

Ironically Guy Fawkes was not the Gunpowder Plot’s ringleader: Robert Catesby masterminded the plan, a charismatic Catholic figure with a reputation for speaking out against the English crown. But Fawkes gained notoriety after the plot was foiled, as he was caught sneaking into the cellar beneath the House of Lords to ignite the explosives. The Houses of Parliament are still searched once a year before the annual State Opening of Parliament; the Yeomen of the Guard search make sure there are no would-be conspirators hiding in the cellars, although this has become more tradition than a serious anti-terrorist precaution. The fireworks we use on Bonfire Night represent the gunpowder that never exploded.

It was a period of religious oppression and turmoil in British history with limited freedom of expression and belief – we often take this for granted in the UK. In the 21st Century we can now actively choose to worship (or not) any religion freely, well beyond the confines of Christianity. In our modern world religious hatred, bigotry and intolerance still exist despite the lessons of the past.
And then to Armistice Day and Remembrance.

Armistice Day is held on 11thNovember every year, commemorating the signing of the armistice between the Allies and Germany at 11am on 11th November 1918 – the eleventh hour of the eleventh day of the eleventh month. Although hostilities continued in some areas, the armistice essentially brought an end to the devastation of the First World War. Poppies are worn by millions as a symbol to remember all of the people who have given their lives for their country in war.

A two-minute silence is held at 11am to remember the people who have died in wars. There is also Remembrance Sunday every year, which falls on the second Sunday in November. On Sunday 13th, Westholme will be represented at the Civic Service of Remembrance, laying a wreath of poppies at Blackburn’s Memorial in Corporation Park. We will also share our own special Remembrance assembly on Friday, led by the History Department.

Remembrance Day is used to remember all the people who have died in wars, not just World War One. This includes World War Two, the Falklands War, the Gulf War, and conflicts in Afghanistan and Iraq. The first two-minute silence in Britain was held on 11th November 1919, when King George V asked the public to observe a silence at 11am, one year after the end of the War to end all wars. He said ‘All locomotion should cease, so that, in perfect stillness, the thoughts of everyone may be concentrated on reverent remembrance of the glorious dead.” 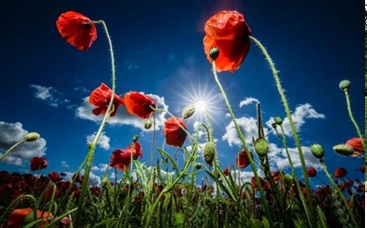 Poppies have become the symbol of Remembrance and the symbol of the Royal British Legion when it was formed in 1921. The first ever ‘Poppy Appeal’ in the UK that year raised over £106,000 for war veterans. The following year, a poppy factory was set up by Major George Howson MC, giving jobs to disabled former servicemen.

In the Spring of 1915, shortly after losing a friend in Ypres, Canadian doctor Lieutenant Colonel John McCrae was inspired by the sight of poppies growing in battle-scarred fields to write the poem ‘In Flanders Fields.’ His poem moved American teacher Moina Michael who began making and selling silk poppies to friends to raise money for the ex-service community. The bright red poppy is regarded as a resilient flower which managed to flourish despite fields being destroyed by war. 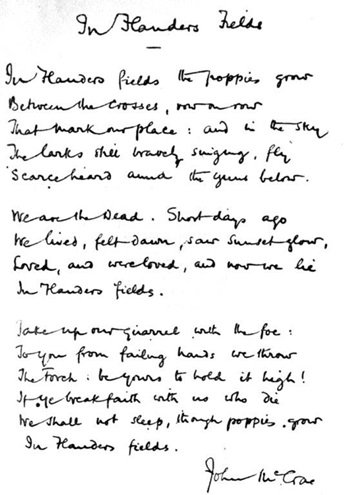 The concept of Remembrance is to respect and acknowledge the bravery of those who gave their lives in service of their country. Services often involve sermons or speeches that emphasise the courage of these men and women who have given their lives to maintain our freedom. Acts of Remembrance do not glorify war but do encourage us to personally and nationally reflect upon the sacrifices made to enjoy the liberty and rights we have today.

It is always important that we look to the future but understanding and respecting our past is equally important. History is not simply a study of facts; our history is an essential part of our identity and has a crucial part to play in shaping our future. We ensure that young people at Westholme have a sense of belonging, individual and national identity and crucially an understanding of the past, present and future…..we will remember.