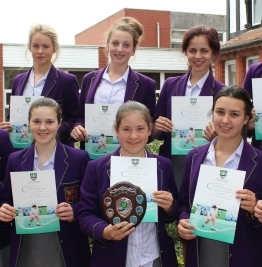 The Blackburn with Darwen Year 10 Rounders Tournament was held at Fenniscliffe playing fields in June.   Eight schools from the area took part in this exciting competition.   The tournament was played in two groups on a round-robin basis with the top two teams going through to the semi-finals.   Due to time restrictions, each match was played over one innings of just 18 good balls.

Westholme won through to the final against Our Lady and St John, where the team sailed to victory scoring 5 ½ rounders.   Miss Entwistle praised this fantastic achievement and commented to their best team progress as in Year 7 they came last in the same competition!

Congratulations to the team – U15 BDSSA Rounders Champions 2012!