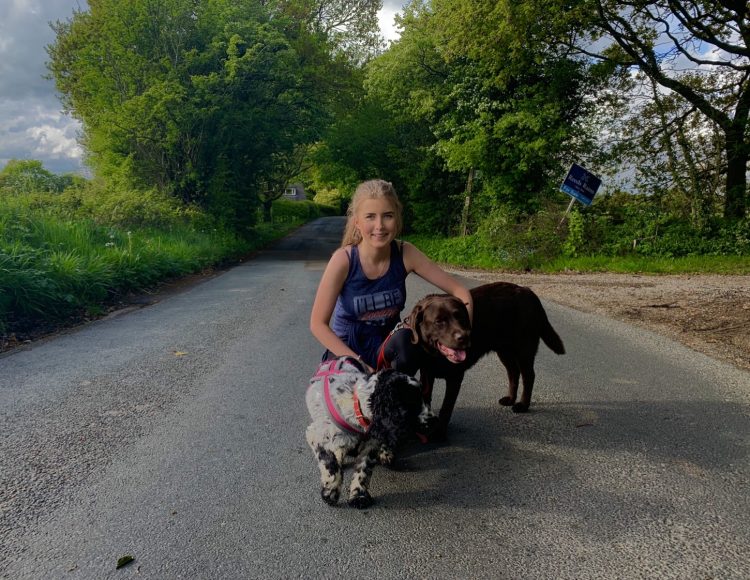 Head Girl, Saoirse O’Neill, has helped raise money for charity by taking part in the 2.6 challenge.

Saoirse challenged herself to walk a minimum of 2.6k each day for a week to raise money for Amnesty International. She was joined by sisters Niamh (Year 11) and Erin (Year 7), their Labrador, Oliver, and Cocker Spaniel, Cara.

Saoirse said: “The 2.6 challenge is something that most charities have been running during the Coronavirus. You can pick the challenge – so I chose to walk a minimum of 2.6k each day for seven days and then donate £20.60 at the end of the challenge.”

The charitable teen, who has completed an Ethics, Philosophy and Religion, (EPR), A-Level, chose Amnesty International because of the research she has carried out at school about the work they do to support the vulnerable.

She added: “Charities have seen such a dramatic decline in fundraising during the Coronavirus, so this has been a way to help them raise funds and awareness.”

Saoirse has been documenting her progress on social media, while highlighting stats released by the charity and the need for donations.

She added: “One of the things I loved most about my time at Westholme School is the sense of community. Our team leader, Mrs Oracz, has been really supportive and has been encouraging us throughout the challenge.

“I have received lots of texts from friends and family saying they have been encouraged to take part in their own challenge or donate to a good cause.”

Saoirse and her sisters planned a different route each day to ensure they walked at least 2.6k – but it was double that most days.

“On one of the days we walked past my grandparents’ house so they could cheer us on from a distance.

“The dogs have loved it. It was raining for two of the seven days, but on one of those days there was a rainbow which really brightened things up.”

Well done, Saoirse, we are all really proud of you!