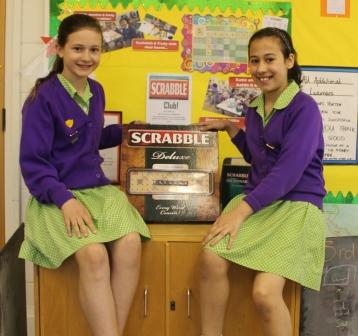 The Scrabble final is contested at Beardwood Bank

Latifah Ahmed and Lois McTiffin successfully made it through to the Girls’ Junior School  Scrabble Final. The two Year 6 competitors were keen to play and gave the Scrabble Club members a good match to watch.

Lois won the starter position and immediately put down the word ‘grit’ – a tough word for a tough player! However, this  was quickly countered by Latifah’s word ‘aids’.

The match continued pretty evenly until ‘quiet’ carefully placed for maximum advantage with the ‘Q’ on a triple letter square, and earning Lois a resounding 33 points,w as placed onto the board.

Sportingly, Latifah played on, putting ‘seed’ on a triple word score, but Lois was impossible to catch in the time available.

Well played girls, it was tough stuff, played with true grit, no aids, in conditions that were definitely not quiet!