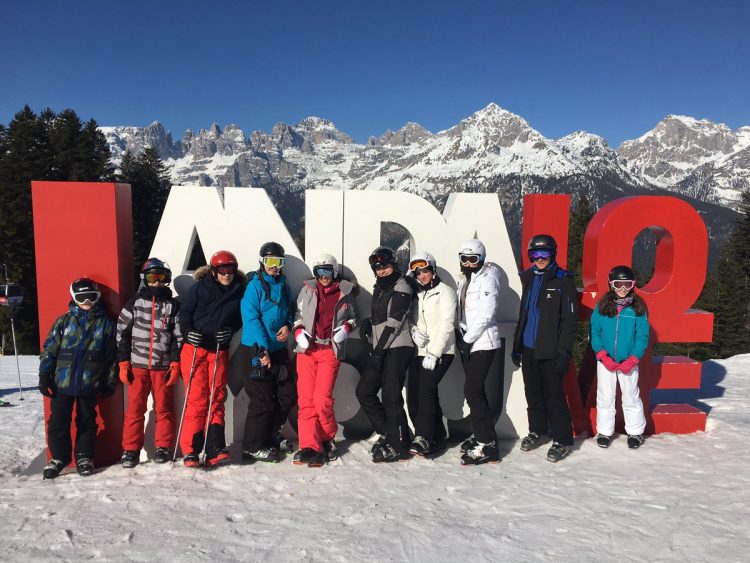 Westholme Senior students had the time of their lives on the Italian slopes of Andalo at half term, with the largest group yet made up of 85 skiers and their teachers.

On February 16th the Ski Trip was ready to take off and due to the size of the group this year, Westholme had their own personal flight! 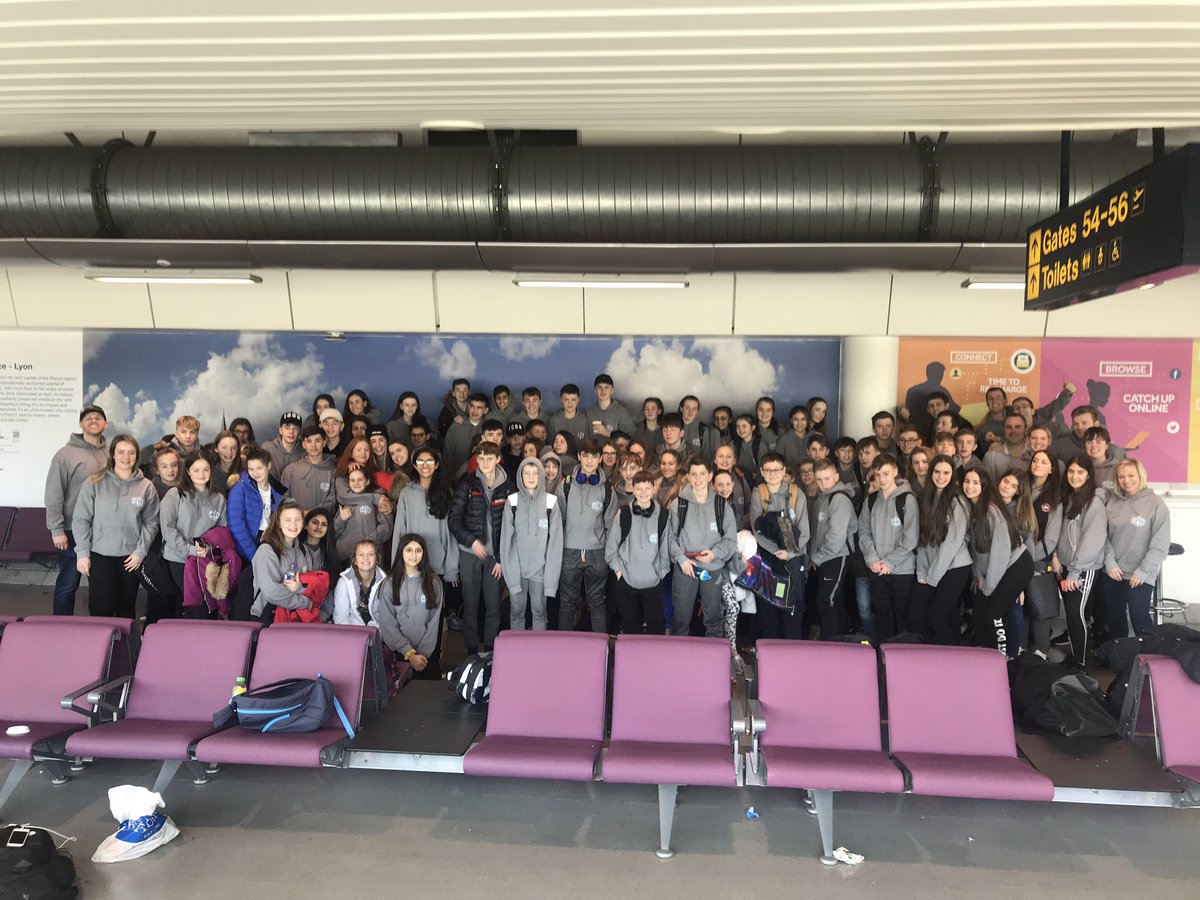 Wow! What a wonderful Westholme Ski Trip we had this year. Venturing into the unknown (to all the staff at least!) town of Andalo in the Dolomites in Italy, would we be pleasantly surprised?

We certainly were! Our hotel, Hotel Andalo was great. As we took over the entire hotel, we had the communal spaces to ourselves. Very important for briefings and the crucial wally hat nominations. Speaking of which, we had two before we even arrived as two lads decided they didn’t need any spending money and left their wallets on the plane. Luckily for them the BA staff found them and came running off the plane to deliver them to us!

As dawn broke on the first morning we were all up and breakfasting heartily ready to set off early to fit skis, boots and helmets. A surprisingly smooth process saw us all ready, correctly kitted out and champing at the bit to hit the slopes at the appointed time. Our instructors found us and we were off! A fabulous first day of skiing ensued and the stories of falls, tumbles and wipe outs were numerous. Still brimming with energy, the students were raring to go and ready for an evening of ice skating. 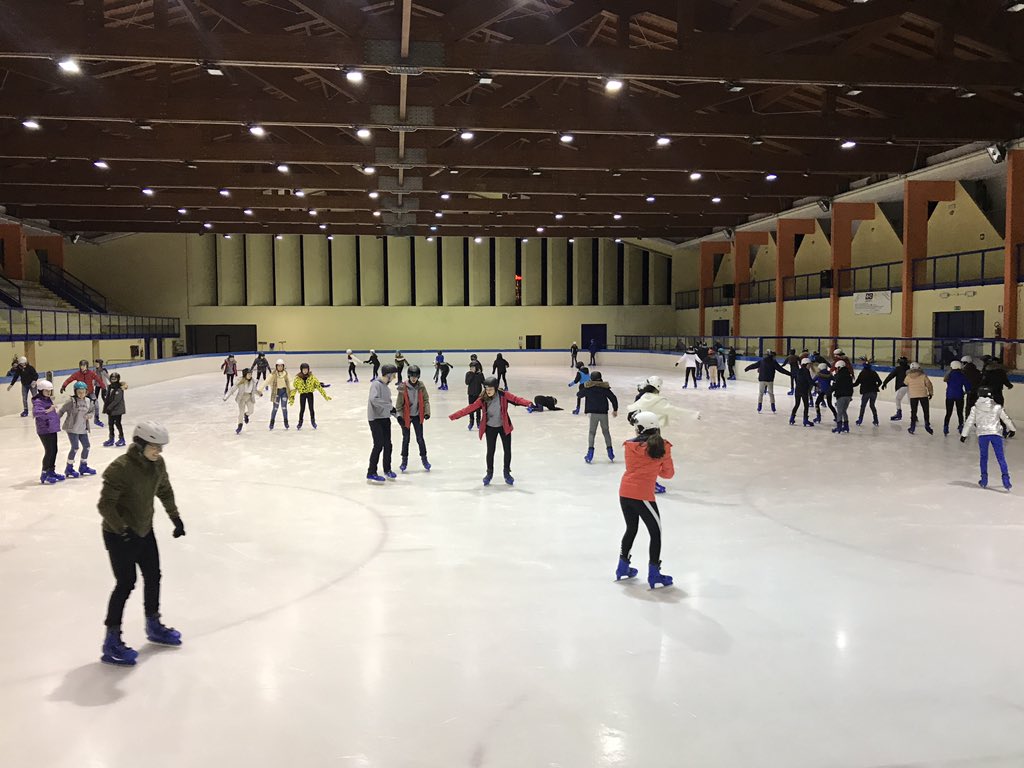 One of the defining memories of our week was the weather. I think we spotted one cloud all week. Otherwise, it was bright and sunny for our entire time, something that is simply unheard of in February. This meant that cold wasn’t a factor and everyone, from beginner to advanced, took real leaps forward in their skiing.

By day three the beginners were no longer beginning, they had fledged into novices in record time. I remember remarking to their instructor one morning as I joined them for a ski, that they seemed to be doing very well. His smile in return showed how pleased he was with them.

If the beginners had progressed then all the others were to be seen hurtling past on the piste, carving out elegant ‘S’s as they showed off their parallel turns and stops. I don’t think I’ve ever been on a ski trip where the group standard of skiing was so high. 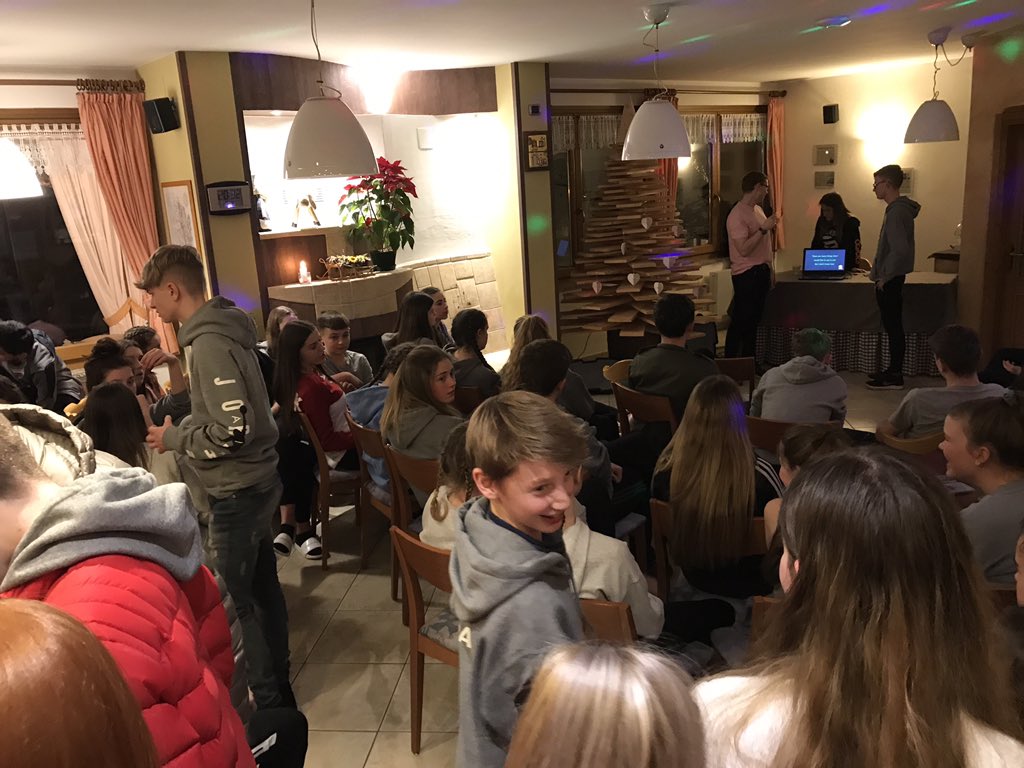 It wasn’t all about skiing though. The nightly ritual of the wally hat was eagerly (or not, depending on what you had done that day) anticipated. This is a silly jester hat, designed to fit over a ski helmet. The unlucky recipient being required to wear it for 24hours until the next presentation. The pupils voted on the wally of the day, usually for skiing related mishaps.

Every evening there were activities to keep us all entertained. Ice skating, swimming, treasure hunts, karaoke, disco and pizza outings were enjoyed by all. Who can forget Harry Deegan singing Country Roads or Ben Middleton and Dr Watson belting out a duet of Wonderwall?

All this activity meant that we all retired to bed exhausted after a long day and night.

The skiers  lovely spot for lunch on the mountain, sun, snow & great pizza – perfecto! After a fun day skiing, it was off for hot chocolate and cake in an igloo. 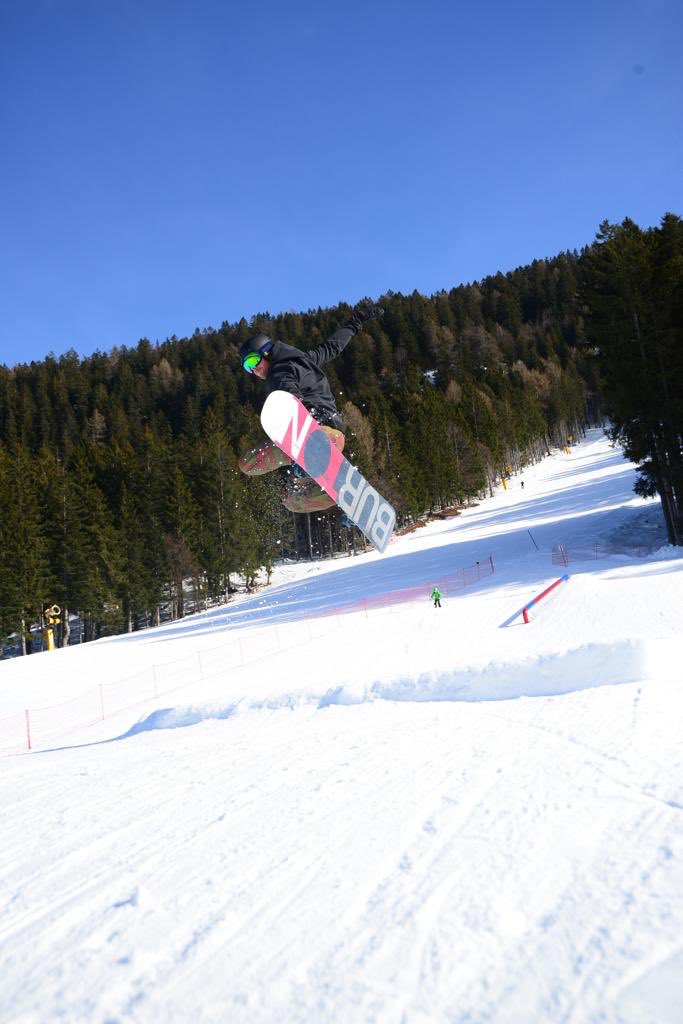 Even the teachers couldn’t help showing off their skills!  – who is that masked man? The  students were ready for another day on the slopes and the Year 11 skiers prepared to be filmed for their GCSE PE exam. 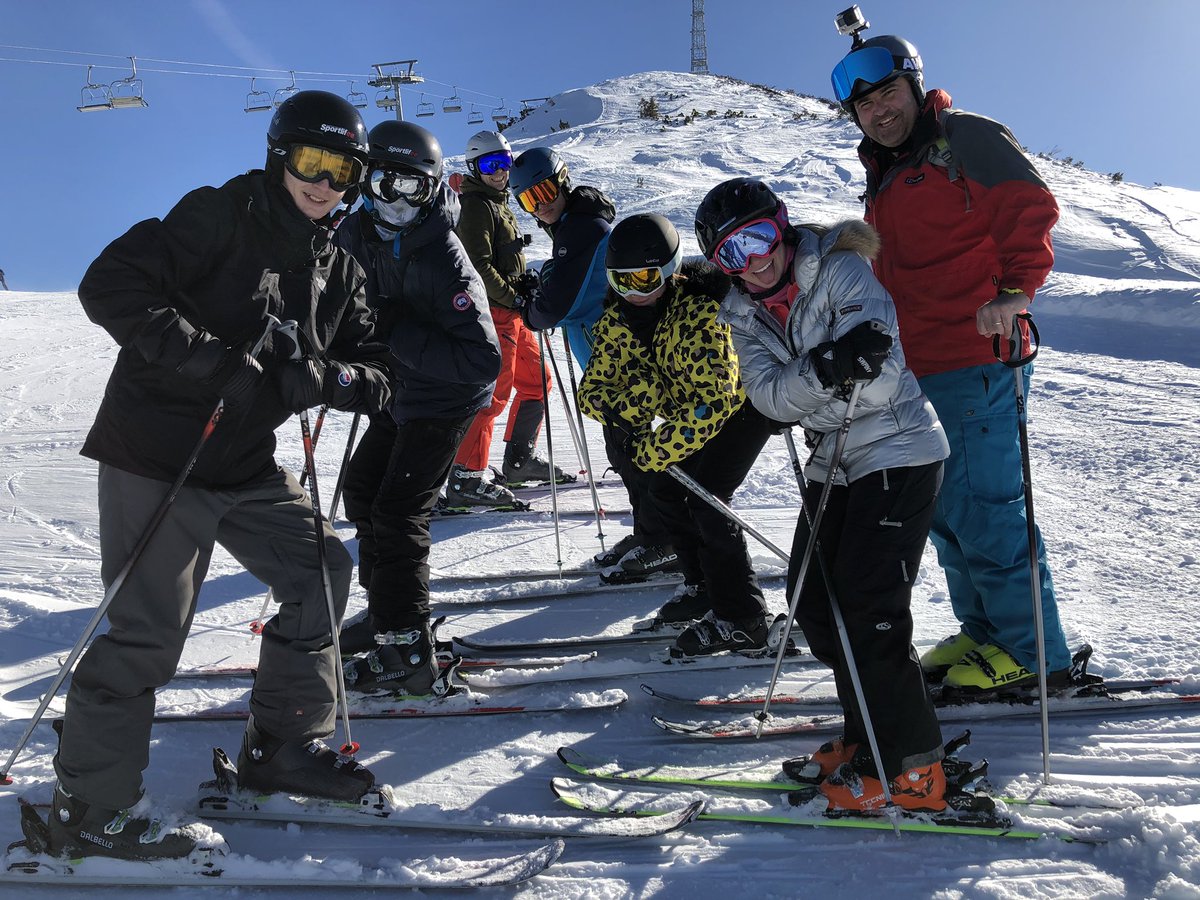 Happily the trip was relatively injury free. Credit must go to Tom Stevens who, despite dislocating his shoulder, remained in good spirits even though he couldn’t ski for the last three days.

I think it best if I let the pictures do the talking as they give a real feel for the warm, friendly, good spirited and fun trip that was enjoyed by pupils and staff alike.

Our thanks must go to Miss Furness, who organised the entire trip. Without her hard work and attention to detail none of it would have been possible. Thank you also to Mrs Horner, Miss Parkinson, Miss Thompson, Mr Cornwall, Mr Patrick, Dr Watson and Mr McGarry for accompanying the trip and helping to ensure its smooth running. 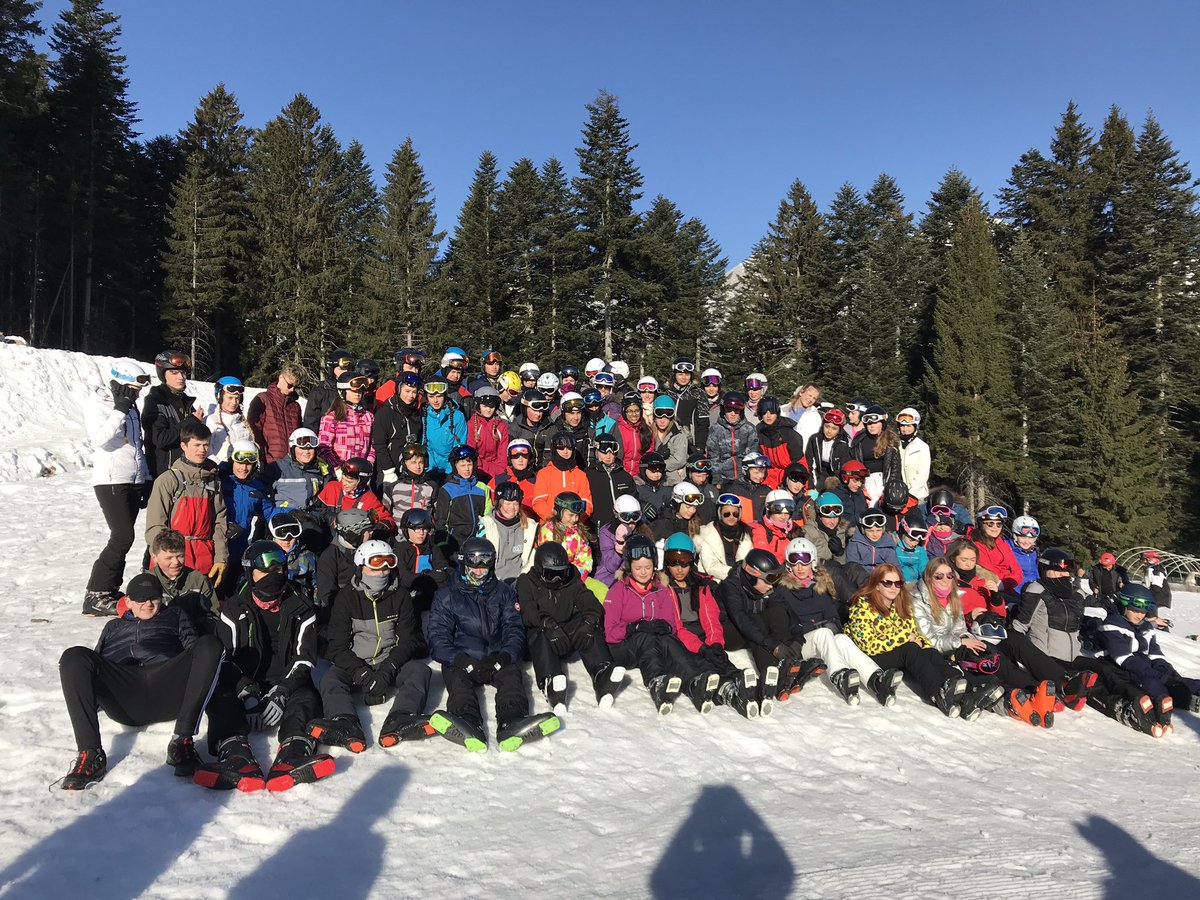 What a fabulous ski trip, such great camaraderie and so many stories to be told… it is an experience that the students will remember for years to come.