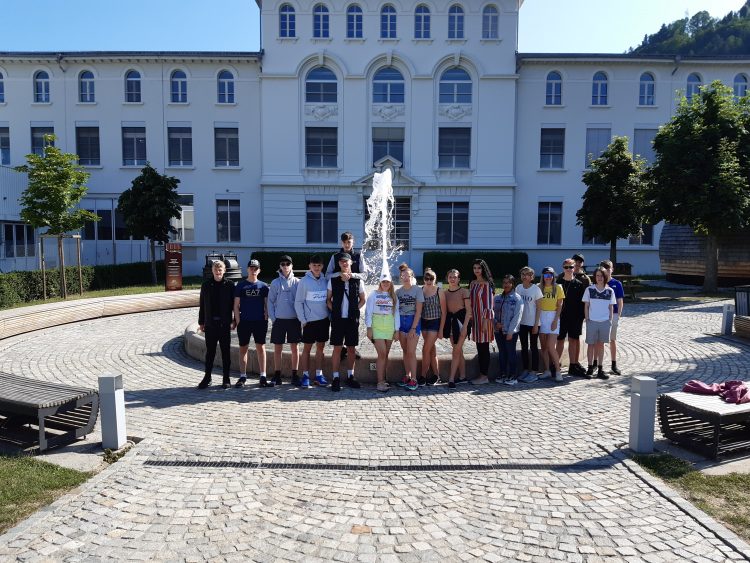 Everyone was on time and eager to get going and despite an airport delay we made it to Geneva for 3.30pm.  More trouble at the baggage carousel meant we missed the train we were booked on but we made the next one and relaxed for a ride along the shores of Lake Geneva to Montreux before changing trains and then climbing through the vineyards and tunnels of the mountains behind it.  Our destination was Chateau d’Oex, a pretty little village in the Bernese Oberland part of Western Switzerland.  It is 1000m above sea level so nice and cool with 2500m peaks all around us, some with the winter snow still lingering.  Andre the owner of the hotel collected the bags so we could stretch our legs and wander through the village and get our bearings before a nice supper and some down time before bed.  The hotel is an old wooden swiss chalet with plenty of charm and set in beautiful surroundings.  We had it to ourselves for the 5 days and as some just sat and enjoyed the views from the balconies the others could let off some energy in the games rooms/courts provided.

A beautiful sunny day that increased in temperature as we descended from the mountains to the first stop which was a chocolate factory.  After an entertaining tour we were allowed to eat as much of the chocolate as we could and have a buy in at the shop.  Next stop was Chateau Chillon by Lake Geneva and quite simply one of the most stunning castle settings in the world.  We had 2 hours to wander around and admire the location and views both within and without before then heading a bit further along the road to a luxury spa and outside thermal bath complex to recover after such a tiring day.  The evening entertainment was topped up by a fantastic electrical storm that lit up the hotel until after midnight.

Today was cloudy and cool after the rain yesterday evening so we packed warm gear and headed to a pass at 1500m where we could get 2 cable cars straight up the side of a mountain to 3000m.  The cable cars themselves were quite exhilarating but nothing compared the cold and icy conditions on the top.  The sky bridge was a narrow open bridge between two peaks that tested the nerve of those who dared it and then a very chilly chair lift took us down onto a glacier where visibility was unfortunately rather poor but we still managed a snow ball fight before heading back to warm up.  We had lunch in Les Diablerets then took a scenic and, for some, acrobatic walk along a river to a rope park in the trees.  Here we had 2 hours to clip on and climb up any challenge you wanted.  The park had a variety of scary activities to suit all and everyone was free to tackle what they wanted in their own way.  The evening activity was 10 pin bowling which turned out to be a new experience for some.

We had a long bus ride to Lauterbrunnen near the Eiger and a seemingly longer wait for the tickets as Switzerland’s renowned efficiency was not on display here today.  We took a train up to the pass below the Eiger looking down onto one of the World’s most spectacular valleys and finally another train through the mountain until we reached 3400m just below the summit of the Jungfrau.  This is Europe’s highest railway station and it is buried into the mountain which makes the sudden appearance of the views when you step out all the more dramatic.  We were high up on the Aletsch glacier (Europe’s longest) and the sun was out with spectacular views of all the central Alps in each direction.  We managed a bit of a glacier walk in the sun before a snowball fight chilled people off a bit.  Then back inside to walk through a tunnel and carvings cut out of the inside of the glacier before a chance to see all the other features they have placed up on this mountain.  It was a long journey back and a chance to catch up on sleep for some before a party in the evening.

A leisurely trip back to Geneva airport on trains travelling through the stunning scenery saw us arrive with plenty of time to spare which typically coincided with a 2 hour plane delay.  Everyone was tired but patient and the plane did eventually get us back in time to hit rush hour traffic around Manchester.  A rather later finish to the trip than planned but a success on many fronts and hopefully some good memories that will entice us back for more adventures.

A great time was had by all!