Should the Death Penalty be Restored in Great Britain

Speakers for the proposition:   Jade Whittaker and Eleanor Lynch

Speakers for the opposition:   Hattie Campbell and Katie Atkinson

Tempers flared as Sixth form students, Jade and Eleanor urged us to bring back the death penalty as a deterrent to further violent crimes on our country.   Hattie and Katie called upon the Universal Declaration of Human Rights to counter this view, referring to recent developments in DNA testing which have resulted in many convicted murderers walking free.

The debate raged with those in favour of restoring the death penalty involving the crimes of Adolf Hitler and biblical precedents whilst those against countered with a consideration of forced confessions and bungled executions.

Elsa chaired the debate assertively, bringing it to a close with a vote of twelve in favour of restoring the death penalty to Great Britain and eleven against.

We look forward to our next Big Debate – the topic will be announced soon! 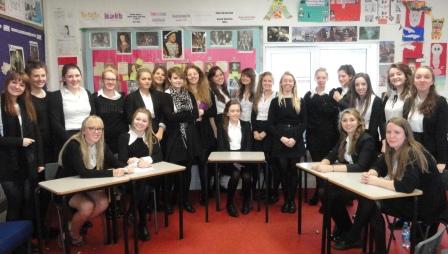