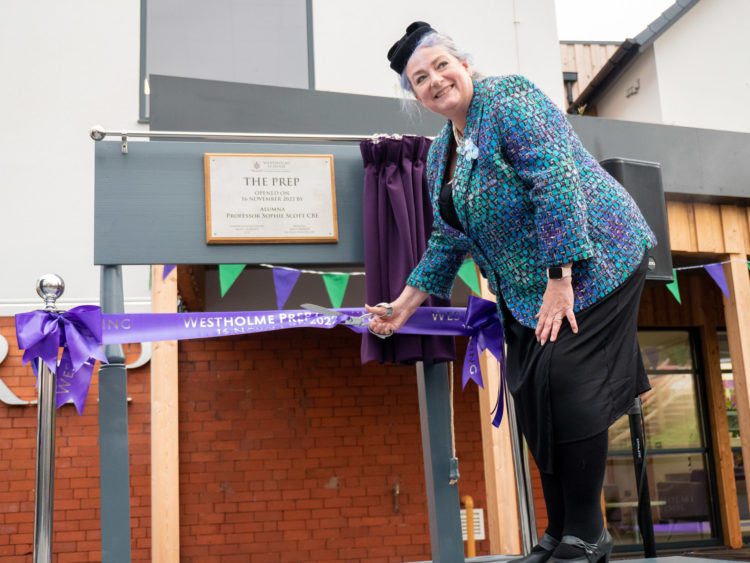 On Wednesday 16 November, we were delighted to welcome a plethora of guests to Westholme for the official Opening of our Prep. This included inviting 75 dignitaries and supporters who all have special links to Westholme and the local community in some way, to attend the event. Amongst the guests were The Mayor of Blackburn with Darwen Borough Council, the High Sheriff of Lancashire, Mrs Croston (Westholme Principal 1988 – 2013) and Mrs Anne Longson, the Great Niece of the school’s founder, Miss Emily Singleton.

Our guests were welcomed and guided towards the Croston Theatre by members of our INSPIRED Sixth Form and student executive. Here they were invited to a champagne reception where they could mingle and chat whilst viewing our Centenary Exhibition that has been erected across the walls of the Theatre Foyer in beautiful fashion. A lasting legacy to Westholme’s history that will be on show for all to see.

After a speech by Dr Robson and enjoying a lunch menu that had been delightfully prepared by our catering partners Thomas Franks, they were given guided tours of the new Prep building and facilities by our Prep pupils and student executives. Walking round in small groups, they were able to view the outside spaces and the children in their classrooms and it was great to see the buzz around the building.

Following the tours of the premises, the official ribbon cutting was carried out by former student, Professor Sophie Scott CBE, now a neuroscientist at University College London. She followed speeches by Chairman of Governors, Mr Brian Marsden, and Dr Robson, to talk to the crowd that had assembled and officially proclaim the Prep building open! Students from the Prep had assembled in lines around the crowd and gave three cheers after the ribbon had been cut.

It was a fantastic day to celebrate the Opening of the Prep after years of development, and it was great to see some familiar faces amongst those who were in attendance and welcome them back to Westholme to witness the next chapter in our School’s history.