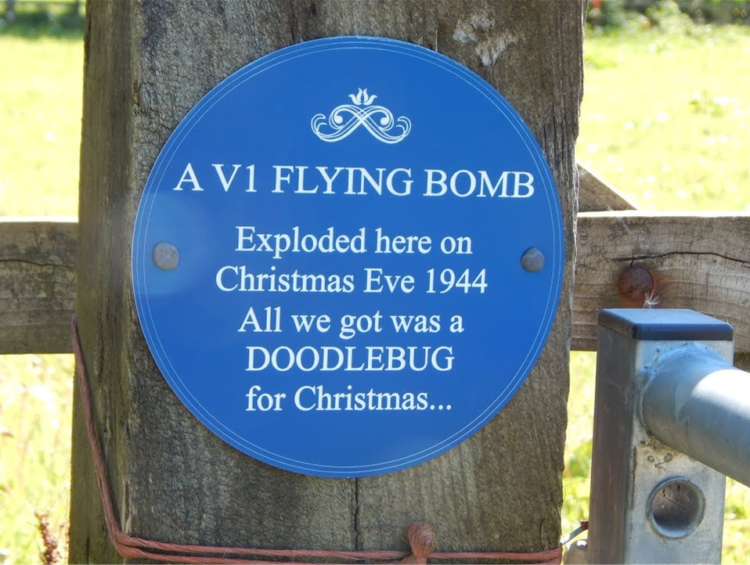 Local ‘lockdown walks’ have recently become an important part of our daily lives.

Getting out and about has undoubtedly been essential for both our physical and mental wellbeing. However, another benefit from local walks has been that many previously hidden sites of historical interest have been rediscovered and appreciated along the way.

Take the farmer’s gatepost for example….

I had heard the story of a Nazi V1‘flying bomb’ that landed near to my house in the small village of Brindle, Chorley during the Second World War but had never got around to finding the exact location of the explosion – that is until I made the chance discovery of the plaque shown above affixed to an otherwise unexceptional gatepost during one of my own family’s local ‘lockdown walks’.

I found out that the so-called ‘Doodlebug’ had exploded at 5.28am on the morning of Christmas Eve, 1944 in a field behind two cottages once situated a short distance from my house. The bomb is reputed to have literally lifted the cottages from their foundations, with the upper floors collapsing. The occupants were very lucky to have escaped without serious injury. The explosion left a huge blast impact crater in the field, part of which is still visible to this day. The site serves as a reminder of the dangers faced by civilians living within the vicinity of the Chorley Royal Ordnance Factory during the War.

Pupils have been sharing similar experiences to mine during their own ‘lockdown walks’. One pupil had been moved by the words engraved onto a 19th Century headstone found in his local parish church graveyard and another had researched the ancient Anglo-Saxon origins of her hometown. A Year 7 pupil, after several weeks of Home Learning, had been encouraged by his mother to imagine the ignominy of being fastened into the town’s stocks during Medieval times!

Local history is an important and accessible part of our curriculum at Westholme. We encourage pupils to develop a sense of belonging and to take genuine pride in their own localities. Young people are naturally curious about the past and they often find stories about how their own area was involved in national or international events both absorbing and fascinating.

I would like our pupils to further investigate local history this term and continue to exercise their sense of historical curiosity when outside of the classroom. Beautiful buildings of historic significance, spectacular castles and national commemorative memorials alongside numerous public museums and libraries will soon be waiting to be explored and enjoyed once lockdown restrictions are relaxed. However, do also remember that a short walk around your own neighbourhood can become a heritage trail with valuable opportunities to unravel the mysteries of the past and learn more about your own unique local historical identity.