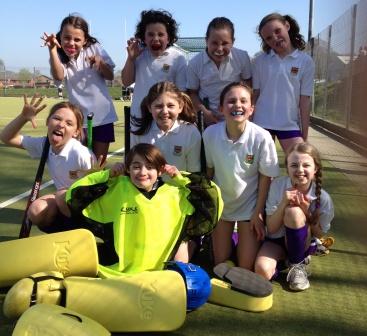 The Under 10 Hockey tournament took place at Kirkham Grammar School.   They were up against some stiff competition from the other 9 schools represented.

They went out determined to do  their best and play very well –  they certainly did that.   After winning 3 out of the first 4 games, the team  had done enough to take them to the semi-final of the main trophy as runners-up in our section.  They played Rossall who were winners of the other section.

Knowing  this was going to be a very good and close game the girls played very hard to turn this into another win for and take them into the main final against the hosts, Kirkham.

Once again, they  knew it would be close and that  they stood a good chance of winning. The score was tied at 1-1 with only a couple of minutes remaining but Kirkham managed to get a winner in that time, meaning that  the team  lost 2-1. However  they did win the silver medals!

Our team played superbly and improved greatly as the day went on. The team voted Elle Heathcote as Westholme’s “Player of the Tournament”.   Well done Elle and to all the girls for playing so well