Students can choose to study Latin from Year 8

Latin provides students with an understanding of grammar and vocabulary which will aid learning in a number of other subjects being studied in the curriculum. Latin focuses the ability to analyse and identify grammar, whilst providing a vocabulary from which 60% of everyday spoken English derives. Pupils are given the ability to read and translate famous works by some of history’s most important authors, whilst being submerged in the foundations of a culture to which we owe some of our greatest achievements and advancements.

Pupils study Books 1, 2 and 3 of the Cambridge Latin Course, following the lives of Lucius Caecilius Iucundus and his family in ancient Pompeii in AD79, and moving forwards with his son Quintus to the civilisations of Alexandria and Roman Britain. Pupils are immersed into the ancient life of a Roman family, learning about all aspects of their lives, from their excursions to the amphitheatre to witness a set of gladiatorial games, to the Roman baths, where they could relax in the varied steam rooms and hot pools to bathe in. The pupils will develop an understanding of the language and its grammar, whilst studying the culture and background. Aspects include the Roman amphitheatre and gladiatorial games, ancient religion, mythology, the daily life and home of a Roman citizen, and Roman bathhouses.

At GCSE, pupils analyse the original text of the Aeneid, the Latin verse written by the famous author Virgil, focusing on the famous hero Aeneas and his journey to become the founder of Rome. In addition to this, they develop their knowledge of Roman culture by developing their knowledge of topics such as Roman religion, entertainment in ancient Rome, Roman Britain and the history of Rome.

Pupils continue to develop their translation skills, building upon the language they have studied since Year 8 and focusing on more complex features of the grammar.

The department runs regular trips to Italy and Greece as well as taking opportunities to take students to appropriate Theatre productions as they become available throughout the year. 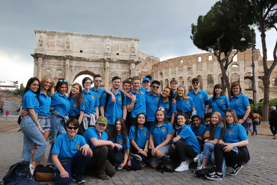