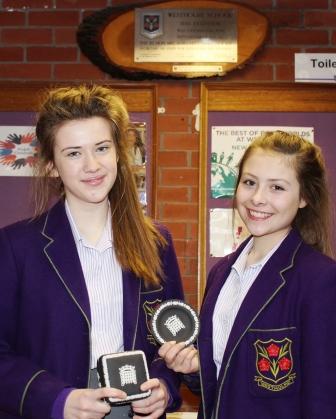 Special school assembly to commemorate the life of Margaret Thatcher

In the week of Baroness Thatcher’s funeral, we at Westholme recalled our own memories of when she visited our school to open the Thatcher Wing.   In a special school assembly, Mrs Croston spoke of her political history, celebrating the fact that she was Britain’s only female Prime Minister.

The Thatcher Wing was opened on September 30th, 1970, and there is a commemorative plaque outside the Dining Hall to mark this event.   The plaque is mounted on a cutting from a 300 year old oak tree from the Wilmar Lodge site.    However, the opening ceremony didn’t go quite as had been originally planned.   Due to an emergency cabinet meeting, Mrs Thatcher had to send her apologies and  her Parliamentary Private Secretary, Mr Alfred Hall-Davis, MP took her place.    Some weeks later, Mrs Thatcher honoured the engagement and visited school to see the newly-opened wing, and she brought beautiful Wedgewood gifts to mark the occasion.     Mrs Croston spoke of how, on a trip to London some weeks later, staff and pupils visiting Downing Street unexpectedly saw Mrs Thatcher and she stopped to say how she recognised their distinctive purple school uniform and how she had very much enjoyed her visit.