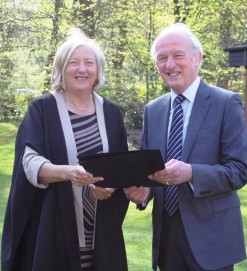 A special assembly was held at Westholme Senior School  to mark the retirement of Mr Kenneth    Ainsworth as Chairman of Governors.   Mr Ainsworth spoke about his amazing seventy year association with Westholme School, from 1943 as a five year old pupil at Billinge House, through to being a parent of two Westholme pupils and his career path through the Westholme Association parent committee, to becoming a nominated governor and ultimately to his twenty one years as Chairman of Governors. Mr Ainsworth listed many highlights in the school’s history, including the opening of the Science Wing, the doubling in size of Beardwood Bank, the opening of the Theatre and the Sixth Form centre and the creating of the Junior Boys’ School, the Nursery and, more recently the Senior Boys’ School as significant milestones under his chairmanship.

Mrs Croston thanked Mr Ainsworth for being such a staunch supporter of Westholme and praised his service and loyalty to the school.    The Head and Deputy Head Girls presented Mr Ainsworth with gifts and a card to mark this auspicious occasion.