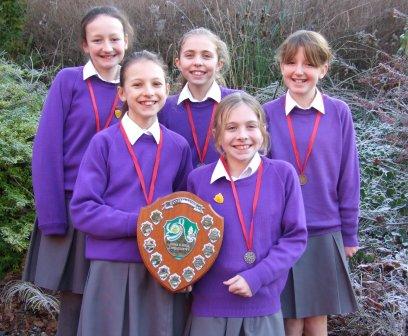 Westholme triumph in the Catterall Shield

On Wednesday 19th January, we went to Giggleswick for the Catterall Shield Cross Country competition.  We have been before and done very well considering how high the standard of runners are.  The weather was better than in previous years, but parts of the “rough field” were very boggy!

Most of the course is uphill, making it hard to run on, but combined with the boggy ground, it made a very tough course.

Our five intrepid Year 6s were ready, willing and able to tackle the difficult terrain and to do their best – they certainly did that! They were awesome, no other word for it.  Every one of them battled with great determination all through the course.  It was a great team event, with everyone trying to get one place further ahead so we had the best point score we could possibly achieve.

We knew we had scored very well with a team score of just 24, but were up against Hunter Hall, who had won the trophy four times before, and were expecting to win it again, but they did not bargain for the Westholme determination and spirit!

We won by the small margin of 3 points!