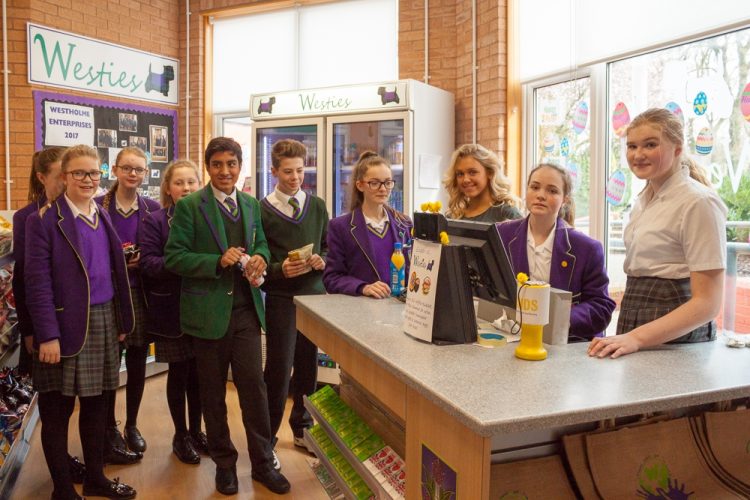 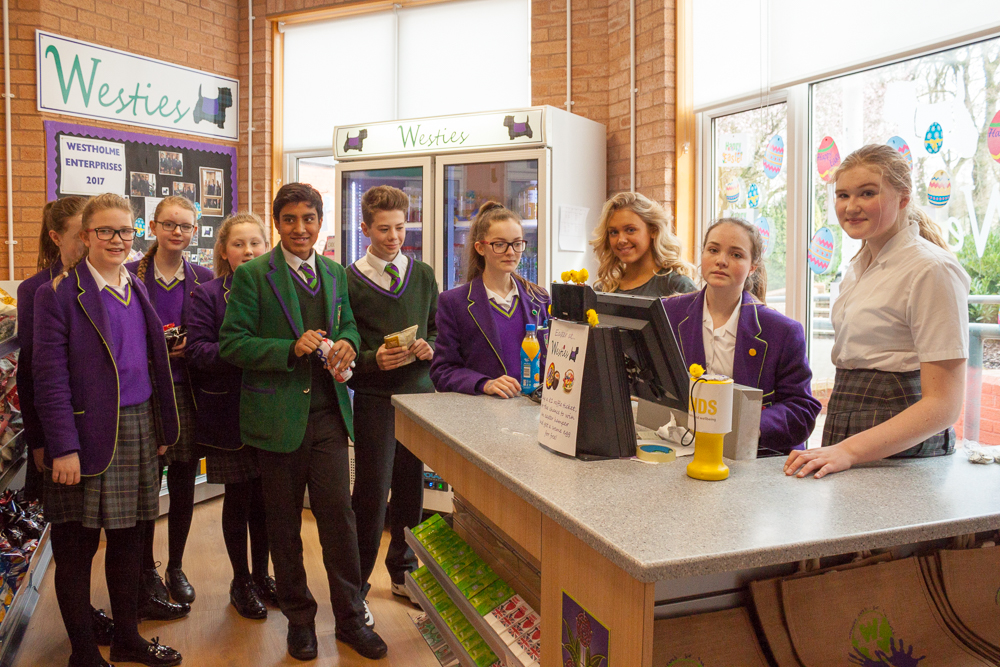 One school year is a long time and it is a little over nine months since a group of students dared to launch their very own school business – Westies – something all of the students are now all very familiar with.

Nine months ago amidst the excitement of revealing their logo and wondering what the new building in the Theatre Foyer was going to become, they really had no idea if they could make this venture a success or not.

Initially they met after school and relied on the enthusiasm of our fellow students to get this venture off the ground. Last April the shop was built and stocked, the opening was a success and they had secured their financial loan – they needed to start trading as soon as possible in order to meet payback deadlines, and thankfully from day one Westies has been busy and popular amongst students.

Westies now have a clear management structure in place with defined roles and responsibilities; Charlotte Marshall is MD but she will however be standing down to do her A levels and a new management team will have to be appointed.

The team now spend their enrichment times on Wednesday afternoons working on Westies and are pleased to have been joined by an increasing number of lower sixth pupils who have worked together to become involved more in this business venture.

Chloe Pritchard is learning how to put together an end of year profit and loss account – which will support her University application for next year. Rumi Sutton and Isabelle Jackson have been involved in placing stock orders and investigating new product selection – as Operations Manager Ellie has been keen to show them the ropes and explain how she has enjoyed this role over the last few months.

They are also delighted that a number of year 9 and 10 pupils – namely Alex Putman, Rebecca Sumner and Zaid Ahmed, to name but a few, – have had the opportunity to serve in the shop during lunchtime opening hours. They were recruited selected and trained by Francine Tattersall – HR Director.

Their work in Westies can be accredited as Duke of Edinburgh work experience or is just a chance to learn how to serve and handle money. It has been great to see younger students not only enjoying the shop as a facility but also become increasingly involved in its future.

Westies stocks an ever evolving range of food, drink and stationery items, house t-shirts, and they are hoping the freezer item sales will pick up again once the warmer weather returns. They have designed and sold a limited edition Christmas bauble as well as introducing a loyalty scheme. The Marketing team under the watchful eye of Layla Patel, Marketing Director, looks after PR and Social Media and Layla has been recently joined by Emma Taylor and Anya White.

All businesses need to be aware of their moral compass and behave ethically. As such they are proud to have also raised money for charity through the Westies Shop. Westies is repaying its loans and is on course to make a profit at the end of the first year. This is in no small part thanks to the fact that everyone involved gives their time voluntarily and for free. Westies as a business is registered separately to school and as such the profits belong to the business, it was always the intention that any profit made, however, would go to buying something in school which will benefit students.

The Team would like to thank all of their customers for supporting their venture, for allowing our business to thrive, as an educational facility, a teaching resource and an income stream

Hopefully Westies will be a part of Westholme for many years to come!