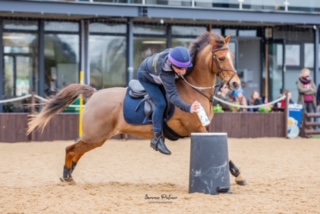 Will, in Year 10, along with 5 other gifted young riders from Blackburn and District Pony Club have made local history with their trainer, Elaine Barker, by qualifying as one of only 6 teams across the country, for the Prince Phillip Cup, a mounted games competition.

In order to qualify Will competed in a zone competition against other area winners along with his teammates in July, and won! This prestigious show is held over 5 Days at The Horse of The Year Show (HOYS) in the National Exhibition centre (NEC), Birmingham, in October 2021.

Will’s mum has said that “this is the absolute pinnacle of pony club mounted games and to be honest we are all still a bit stunned by it, it’s quite unexpected.”

PHOTO: Will is pictured here (second from the right) on his pony Bella, along with his teammates.

Mounted Games was the inspiration of HRH Duke of Edinburgh, Prince Philip. When Col. Sir Mike Ansell was Director of the Horse of the Year Show, Prince Philip asked if he could devise a competition for children who could not afford an expensive, well-bred pony, and in 1957 the Horse of the Year Show, then at Harringay Arena in North London, England, staged the first Mounted Games Championship for the Prince Philip Cup, it was an immediate box office success. Each year over 300 pony clubs nationwide compete in several rounds of competition to qualify for one of the places. Riders require athletic ability, riding skills, hand-to-eye coordination, determination, perseverance, and a competitive spirit, but still need to be able to work together with other riders and a willingness to help one another – making it one of the most engaging Pony Club disciplines to watch for both equestrians and non-equestrians alike.

Any child on any pony can compete, but it is rare and exceptional to make it through the qualifying rounds and all the way to The Horse of the Year Show. Only 2 North West teams have made it over the years to showcase their skills and battle it out for the title of Prince Phillip Cup Champions!

Will’s team trainer, Elaine Barker, also happens to be a former Westholme pupil! She has been riding or training in this sport for over 43 years and this is the culmination of what has been a life time ambition. She says: “for the riders and ponies, this will be a once in a lifetime opportunity; experiencing how the determination, grit and hard work they have put in to achieve the dream of a HOYS ticket feels when they ride out through that HOYS curtain in front of 15,000 people.”

The team, their parents and trainer Elaine will all head down to the NEC on the 4th of October where they will compete across the week. A test of stamina, skill and perseverance. On top of racing daily in the main ring against the other 5 qualifying teams, they will be judged on their conduct and presentation, stable management and pony care. They take part in a show that they must write and produce for the HOYs Officials and they are interviewed by the press and public on their achievement and Pony Club experiences to date. Elaine added that “it will be an exhausting week, but I know I speak for us all when we say that we simply can’t wait!”.

In order to compete, Will and his teammates have had to work hard to raise funds to ensure they and their ponies have everything they need to be able to give their best performance over the 5 day competition. Riding at such a distinguished event is a fantastic opportunity, not only for the children but also to showcase the drive, determination and talent of young people in Blackburn and the surrounding area. They have worked hard running raffles and sweet stalls at many competitions, and are planning a show case evening at Shores Hey Farm HAPPA on the 14th September please see HAPPA’s website for details (https://www.happa.org.uk/events/2021-09/).

If you can offer support in anyway to help Will, they have set up a just giving page where it is easy to donate using the link (https://www.justgiving.com/crowdfunding/blackburnanddistrictppc/admin).

Congratulations to both Will and Elaine on their achievements, it’s safe to say that everyone at Westholme will be supporting you in the final!