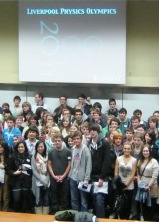 In October, five Upper Sixth students took part in the twentieth World Wide Physics Olympics at the University of Liverpool. Students had to propel pop bottle rockets as far as possible without hitting the door frame they were travelling through. They had to locate radioactive sources which were hidden, find the Higgs Boson and navigate their blindfolded team member round a course without talking to them. During the day the girls had the ever challenging Fermi Quiz to complete. Could you calculate the number of electrons in the human body from your general knowledge?

At the end of a very enjoyable, but brain-straining day, both staff and students were extremely pleased to find that we had achieved sixth place against thirty of the best schools and colleges ranging from Wales to York. A fantastic achievement of which the girls should be very proud.