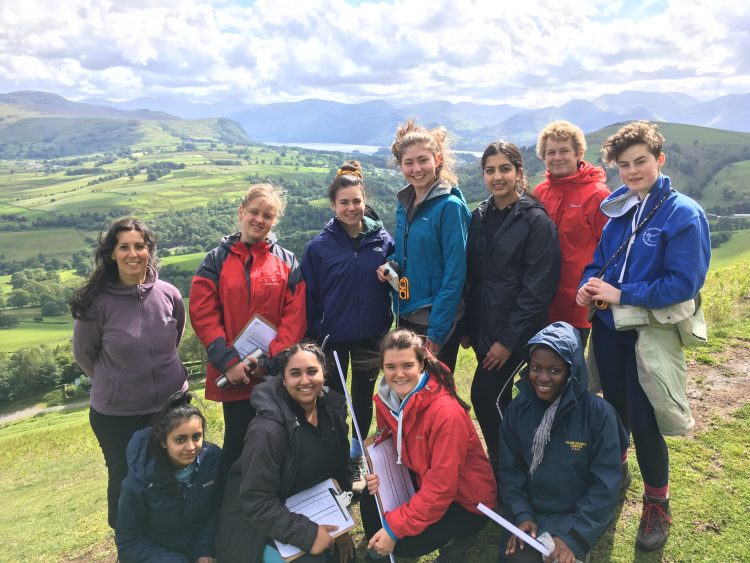 Year 12 biologists recently spent two enjoyable days at the Blencathra Field Studies Centre, in the Lake District, working on the Ecology topics for their A Level.

The weather was much better than forecast and we stayed dry and warm for the most part.  We were also lucky to see a red squirrel that had been using the squirrel feeder at the Centre

The students learnt about sampling techniques for measuring abundance and distribution of living organisms and methods of measuring abiotic factors, such as soil temperature and oxygen content of water.

Statistical tests they had recently studied were put to good use to analyse their data and determine the significance of any differences or correlations.

Freshwater Ecology was the first investigation, during which we studied the differences in abiotic factors between ponds and riffles in St. John’s beck and how they influence the distribution and abundance of freshwater invertebrates.

Mayfly nymphs, caddisfly larvae and freshwater shrimps were particularly abundant, showing that the water had a high oxygen content and was therefore relatively unpolluted.

The Mark-Release-Recapture method with the Lincoln Index, used for estimating the population size of a motile species, was used to count the number of Ramshorn snails in the Centre’s pond.

On day 2, we investigated primary succession on a lithosere in the Caldew Valley.  The scree slope has rock falls of different ages so it is possible to look at how plants colonise and change the environment for other plants to grow in.

We also investigated the abundance of bracken on Blease Fell, linking this to altitude above sea level and the frost line, which has an impact on where bracken can grow and survive.

It was a very worthwhile trip; the students enjoyed themselves, they worked hard, learnt and practised new skills and improved their knowledge and understanding of Ecology.