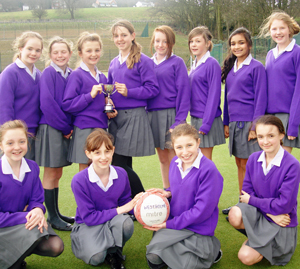 Westholme’s Year 7 A & B Teams are Netball Champions!

The Year 7 Blackburn with Darwen Netball Tournament was held at the end of the Spring term at Witton Park Astroturf.  It was a freezing cold, wet and windy night!

There was an A and a B Team competition.  Five schools entered the B competition and Westholme’s team played well to win all their matches and so won this competition.

Eight schools entered the A competition and Westholme’s Year 7A team played very well until their last match, where the girls struggled to cope with the severe weather conditions.  Their results were as follows:

With these results the A team were joint top with 18 points but as Westholme had a better goal difference they were winners of the competition.