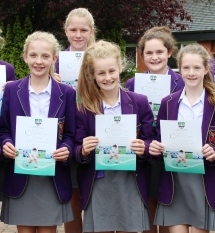 The Year 7 Rounders Tournament was held at Feniscliffe playing fields.   All the Westholme girls played brilliantly in the group’s stage, winning it comprehensively.   The team then went on to compete in the semi finals where they again won their matches.   In the finals, the Westholme team played DACA.   The girls battled extremely well and won the match, and the Tournament 5 – 2.

Congratulations to the Year 7 Rounders Team who have been crowned Blackburn with Darwen Rounders Champions for 2013.