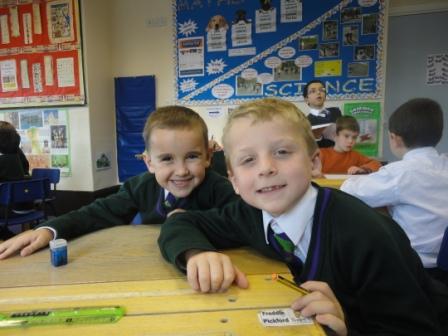 Year Two enjoy a Taster Afternoon at the Junior Schools

The Year Two children enjoyed an afternoon spent at the Boys and Girls Junior Schools today. This was the first in a number of visits they will make throughout this academic year and they are aimed at settling them in before their big move up next year. The boys enjoyed listening to a story called The dragon’s treasure read out to them by Mrs Daley.

After hearing this, they went on to act out some of the scenes from the story one of which included pretending to be a ferocious dragon! Finally, after the excitement of acting, they were all able to go back to the classroom where they enjoyed drawing a picture of a dragon that they would be able to take home.

The girls were equally as excited at spending time with Miss Lomax and Miss Rimmer in the Year 3 classrooms at Beardwood Bank. They enjoyed getting busy with the glue, glitter and sequins as they each made a fairy bookmark.

They later did some glass paintings of fairies. What a fantastic  afternoon for a little girl!