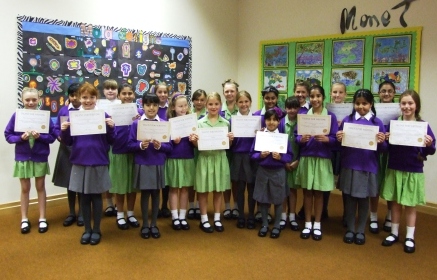 A selection of pupils have been successful in the Young Writers latest competition, ‘Once Upon a Rhyme’. Some of the girls’ (who are now in Year 6 at Beardwood Bank and Year 7 at Wilmar Lodge) poems were sent off for consideration in the competition during the Summer Term.

After the editorial team selected work based on perception, imagination, expression and good use of language, we have been pleased to learn that all of their hard work has paid off. The winning entries will now be published in ‘Once Upon a Rhyme Lancashire and Merseyside’ where a main copy will be kept at the British Library and further copies will be held at libraries across the country, providing a lasting record of the girls achievements. This will be published on 31st October 2011.

Congratulations go to the successful writers: