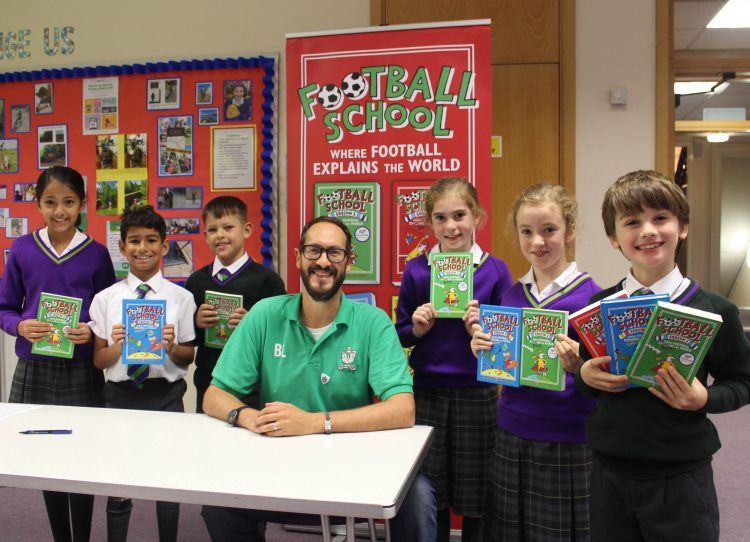 Children in Years 2-6 enjoyed a visit from author, Ben Lyttleton this morning, in conjunction with our friends at Silverwood Events. Ben came to our Junior School to talk about his series of books, Football School.

At Football School, every lesson is about football. The books are packed with true stories, real science and fascinating facts.

Ben guided everyone through a typical day at Football School. In the Biology lesson, the discussion focussed on what foods footballers should eat before a meal and how long it takes to digest the food.

Brazil was the topic for the Geography lesson and children discussed the weather and how, due to the fact it was so humid, footballers there could not play on grass and had consequently adapted to playing either on the beach or in the cities. A highlight for many was when Ben explained that most Brazilians are brought up learning to dance ‘Samba style’ and this is why many of the footballers from this country have flexible hips and feet, making them experts on the pitch. Everyone joined in a group Samba dance which was great fun!

Other subjects covered were Zoology, where Ben showed a picture of an eagle and explained how it is the most popular mascot/crest logo in football because of its traits, namely being smart and accurate – hence the phrase ‘eagle eyed’ and Drama where children were able to use their acting skills to fall over after a tackle or overreact after being issued with a red card.

Ben also explained that Maths is an extremely useful lesson to take part in when it comes to the world of football. The children quickly realised that they use Maths for working out how much time is left in a match, how many penalties have been scored and what the overall score of a two-leg match is.

Other highlights included the quiz at the end of each lesson and the opportunity (for some) to perform their best goal celebration ever.

At the end of his talk, the children were encouraged to ask questions before being able to get the copies of the books they had bought signed by Ben.

Thank you to Ben for entertaining our children so well and to Elaine and Jake at Silverwood Events for once again bringing an excellent author to school to inspire our children.