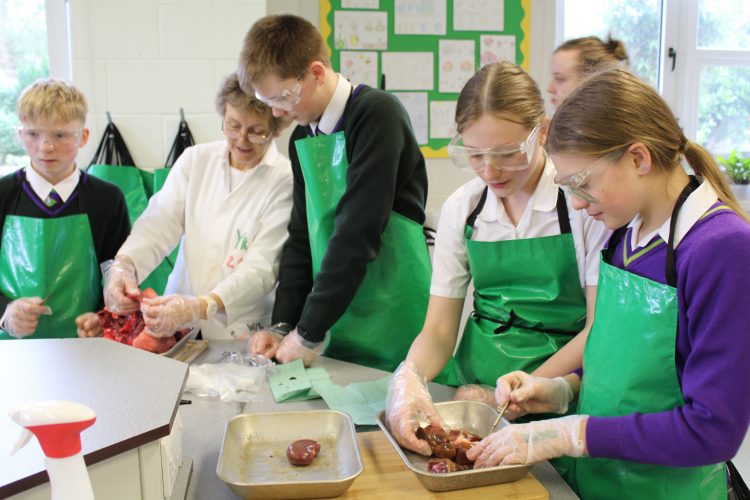 This week students looked at how science affects our everyday lives and how it may influence them in the future.

British Science Week was officially launched on Monday in an assembly led by members of the science department, Mr Hiller, Mr Charnock and Miss Incerti.

Mr Hiller discussed green energy solutions with regards to transport and compared the pros and cons of electric and hydrgen powered engines. Mr Charnock talked about the relationship between food nutrition and the health risks of additives in convenience food, whilst Miss Incerti chose the current subject of the coronavirus.

On Monday, the lunchtime activity saw students sow sunflower seeds in a bid to win the competition to grow the tallest one. Competition was fierce from the outset with many of the Science staff also taking part. We look forward to seeing the sunflowers later in the term.

Some students chose to do dissections of lamb’s heart and lungs and looked at how the internal organs of the body work .

On Tuesday lunchtime, students came to the theatre to make compressed air powered rockets. Once constructed, they had to alter angle and air pressure to try and hit target rows, worth sweets.  A bonus prize went to Chloe, as she was the first to hit the back of the theatre from on the stage.  What better way is there to celebrate British Science Week than with rockets, Physics and sweets.

On Wednesday, the theme was DNA and genes.  The ability to extract our own DNA from our cheek cells and see it, never fails to be a wow moment. The DNA is then put it into a vial on a necklace, allowing them to carry it around and show their friends and family. The students made bracelets using different coloured beads depending on their characteristics, and therefore, their genes.

They considered if they had dimples or not, hitchhiker’s or straight thumb, straight or curly hair and various other characteristics that are mainly controlled by one pair of genes.

Students were invited to take part in four different activities on Thursday, all of which involved either drama or excitement. The first saw the lighting of methane bubbles, which certainly warmed the room up!

This was followed by a reaction which took a little time to ignite, but when it did a beautiful lilac coloured flame was produced. Students were then invited to blow bubbles over ‘dry ice’ so that the bubbles hovered above it. The final experiment saw Mrs Hibberd demonstrate the ‘whoosh’ bottle, which certainly lived up to its name! Two students were then lucky enough to have a go at this experiment for themselves.

On Friday in Engineering Club the students made helicopters using an elastic band and other basic materials and then went to fly them outside!

What a fantastic week!