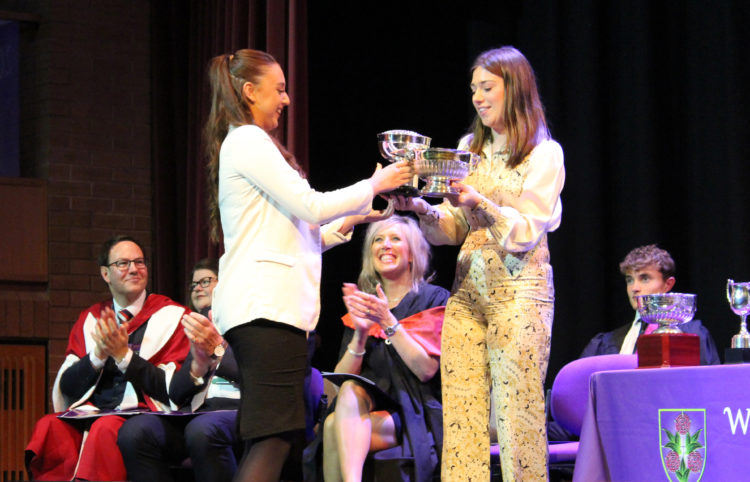 On Friday, 8 July we celebrated the achievements of our students with our annual Senior Prize Giving ceremony in the Croston Theatre. Chairman of Governors Mr Marsden welcomed students and staff into the Theatre with the Chairman’s Address. This was followed by a beautifully played Musical Interlude by the Swing Band, Soul Bossanova by Quincy Jones. The interlude led on nicely to the speech by our student executive team who spoke about the new Prep School building and how we are all very much looking forward to the next chapter of Westholme’s history.

Student prizes were distributed by alumni Jade Jones, who was also the guest speaker for Wednesday’s Prep Prize Giving, and students were called out by Mr Baggett and Mrs Hornby to receive their prizes on stage. Another Musical Interlude, The American Patrol by Glenn Miller, was performed fantastically by the Swing Band before the remainder of the prizes were distributed.

We were delighted to welcome Jade back to Westholme and are very grateful to her contribution to the ceremonies this year. Jade, an accomplished screenwriter, gave an impassioned and inspirational speech about what she would have wished to hear whilst at school and important lessons she has learnt in her career so far. Jade’s passion for writing in all its forms began during her time at Westholme and she spoke fondly about how this was cultivated and encouraged, from her love of literature and writing, to discovering song-writing.

The Croston Theatre played a pivotal part during Jade’s time at Westholme, where she had the opportunity to perform in 11 plays. The stage at Westholme taught her about resilience and being a team player. “It was this ability to improvise and just get on with things – skills which I’ve applied to my adult life so far,” explained Jade.

Jade spends her days writing scripts, pitching ideas to Netflix, BBC, Amazon Prime and Disney to name a few and is currently working in production and will soon be working with Matt Le Blanc, John Boyega, Olivia Coleman, Catherine Zeta-Jones and composer of the Greatest Showman, Joseph Trapanese on a musical film. “All of this has been achieved through the belief of walking into a room and believing I have something to offer and contribute which was instilled in me at Westholme,” stated Jade.

Jade’s speech ended with an inspiring plea to all students:  “When I left school, I followed my passions which is something I strongly encourage you all to do because you’re truly doing yourself a disservice if you don’t. You must think big. Push yourself!”

Following Jade’s speech, Erin and Emilia performed a dramatic scene from Brontë. Finally the Principal ended the ceremony with his Closing Remarks and the whole school joined in to sing the National Anthem to close the ceremony.

It really was a wonderful event, a celebration of our student’s achievements and a great way to end what has been a fantastic academic year. We would like to wish all of our student leavers the very best of luck for their future endeavours and their contribution to Westholme throughout their time here – good luck for the future in whatever it is that you choose to do!