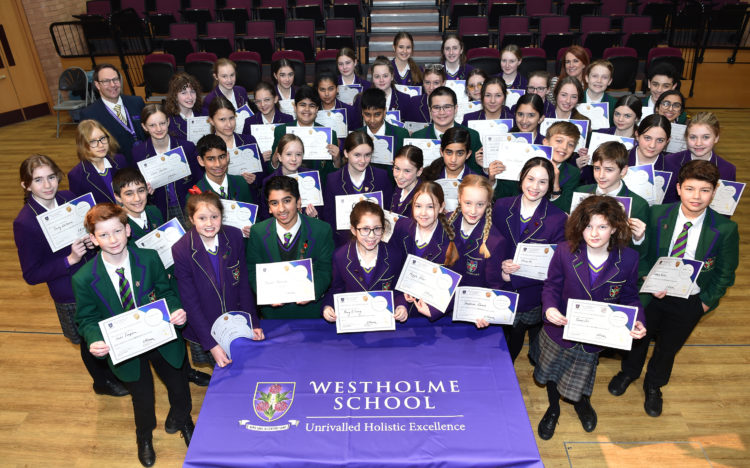 On Tuesday 18 January, Mrs Cowan and Dr Robson presented the first ever Bronze and Silver Westholme Holistic Awards to students in Years 7, 8 & 9 as part of the whole school assembly.

They were rewarded for their commitment to student life both inside and outside of the classroom, having accumulated a set number of credits in four key areas: Academic – Co-curricular – Leadership, Communication and Service to the School – and Personal Development.

As well as either their Bronze or Silver certificate, they were awarded custom-made pin badges which were presented to them on the stage in the Croston Theatre in front of their fellow pupils.

Afterwards Mrs Cowan said, “We would like to say a huge congratulations to all those students who has achieved a Holistic Award. The Award recognises the commitment in all aspects of student life – both in and out of the classroom.”

When asked about the award, Lewis in Year 8 said “There are such a wide variety of activities at Westholme in which you can earn credits – from sports, to drama, to leadership skills. The Holistic Awards encourage you to try things you may not have tried before.”

Olivia, in Year 9, said the introduction of the awards has encouraged her to try a range of classes – from performing arts, choir, digital leaders, and Spanish.

She said: “The clubs are one of the highlights of my day. I think it’s something quite unique to Westholme and it makes it very special.”

We are delighted that students have taken to the introduction of the award with such enthusiasm, and look forward to it continuing in the future. Well done to all those involved!