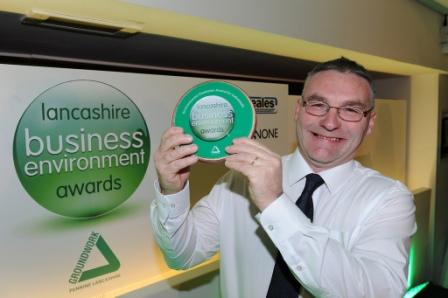 The Awards, which were first introduced in 1997, celebrated its 15th year of showcasing the very best of Lancashire’s environmentally conscious businesses.

After being shortlisted as a finalist, Westholme School won the Environmental Champion Award for Individuals. The school is a member of the Groundwork Pennine Lancashire Enviromental efficiency club for sharing good practise in energy efficiency and recycling, so to receive this award is a true honour for the school. With the installation of solar panels, LED lighting, waste reduction to name but a few, the school has saved an enormous amount of carbon and obviously money!

Joe Galvin, Estates Manager for Westholme went to the awards ceremony and was over the moon to have won! We were the first Independent School to have been shortlisted, let alone to win our category. Well done Westholme!

Joe is pictured above with Debbie Salmon, from Neales Waste Management, who sponsored this award.