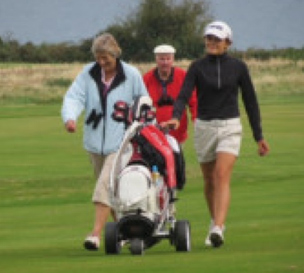 An incredible debut from  Westholme’s Year  10 pupil,  Sophie Lamb helped push Lancashire to within half a point of the county championship.    Sophie ended the championships as Lancashire’s leading point scorer, as well as the competition’s overall top scorer alongside Lincolnshire’s Emilee Taylor.

Played at East Devon Golf Club in Budleigh Salterton, Sophie  registered victories in eight of her nine matches.   The competition, which saw a morning session of three sets of foursomes and an afternoon session of six singles matches, went down to the wire as Lancashire met Essex on the final day.   Trailing their rivals by a point, Sophie and her teammates needed a 6-3 triumph to take the crown on a count back. Lancashire were on track for the title following a clean sweep in the morning session, meaning they needed to win just half of their singles outings. Sophie and former Westholme student, Elizabeth Stebbings, from Wilpshire Golf Club, held their nerve to push Lancashire closer to glory. However, it wasn’t to be as, despite a 5.5 to 3.5 victory over Essex, and both teams boasting the same record, Essex who became county champions for the first time in 33 years by half a point on countback.

Sophie’s dad, Phil, said: “It could not have been closer. Sophie ended up playing more games than we were told to expect so we were very pleased.   The county officials were delighted with Sophie’s play and it was a great experience for her and she loved every minute of it.”

Sophie, now playing off a handicap of one, has also made the Clitheroe Junior Knockout Final for a record third time after winning the two previous finals. The final will be played later this month.

On Sunday 7th October Sophie travelled  to Sandburn Hall in York for the England skills testing day with the hope of eventually being promoted to the England Select squad from the current Birdie squad.